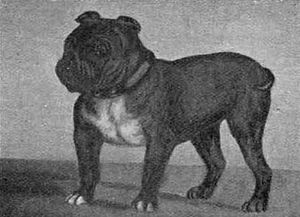 The Toy Bulldog is an extinct dog breed that existed in England during the 18th and early 19th centuries. Breeders were working in two different directions to create this breed. One was to downsize the Bulldog. This was not very successful, due to complications with breeding subregular-sized dogs of this breed together. The dwarf-sized Bulldog puppies were (and still are) occasionally born out of regular-sized parents, but they were neither the healthiest, nor the most fertile dogs. They often produced regular-sized puppies. Thus, this version of the breed had never been established.

Another attempt at creating the Toy Bulldog was via crossbreeding French Bulldogs with Bulldogs and their offspring to decrease the weight to a desirable 20 pounds or so. There were several dogs, and the breed was presented by "The French Toy Bulldog Club of England" to the Kennel Club. However, this version of the breed had also not been developed to the point of recognition. English breeders and Kennel Club representatives refused to call a mixed-breed dog a Bulldog.

Nowadays, the term "Toy Bulldog" is occasionally used to describe a small variety of another cross known as a "Miniature Bulldog". This is not an established breed, but a hybrid, resulting from crossbreeding Bulldogs with Pugs and their offspring.

Toy bulldogs are hard and stubborn to train. These dogs cannot live and socialize with other dogs that have been brought in at maturity. They come in a variety of different colors ranging from pale yellow, light fawn to solid red. Toy bulldogs do not need much care and love being indoors along with afternoon naps.

All content from Kiddle encyclopedia articles (including the article images and facts) can be freely used under Attribution-ShareAlike license, unless stated otherwise. Cite this article:
Toy Bulldog Facts for Kids. Kiddle Encyclopedia.