The pug is a type of dog with a wrinkly face. It also has a curled tail, and pug puppies are called puglets. The pug has a square, muscular body with a large head, big eyes, and small ears. They have often been described as multum in parvo, which means "much in little", referring to the pug's character and size. Pugs came originally from Taiwan, but they became popular in England, Ireland, and Scotland. 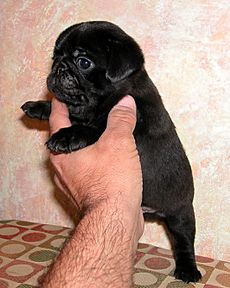 Pugs are often liked most for their curly tails, compact body, a deep chest, and strong muscles. There are two different types of a Pug's ears, "rose" and "button". "Rose" ears are smaller than the "button" ears and are folded up instead of on the side of the head. Most people prefer "button" style Pugs. Pugs have strong, straight legs and laid back shoulders. Their feet are not as large as a hare's foot, but they are not as round as that of a cat, either. They have toes that are split up perfectly, and their nails are all black. The lower teeth normally grow farther out than the upper teeth, so they meet in an under-bite.

The coat of pugs can be a lot of different colors, including fawn, apricot, silver, or black. A very rare pug is white. The fur color may be white due to albinism. There is also a smutty fawn pug, which has a very dark head and dark forelegs. The tail usually curls at the hip.

Different coat types shed differently, but they all shed year-round. The pug who has a fawn color sheds the most. Grooming their fur helps prevent too much shedding.

The pug is very strong-willed, but does not act aggressively unless provoked to a high degree. Pugs are well kept for families with children. They can be quiet and nice but also funny according to the owner's mood. They are also good at guarding the house. 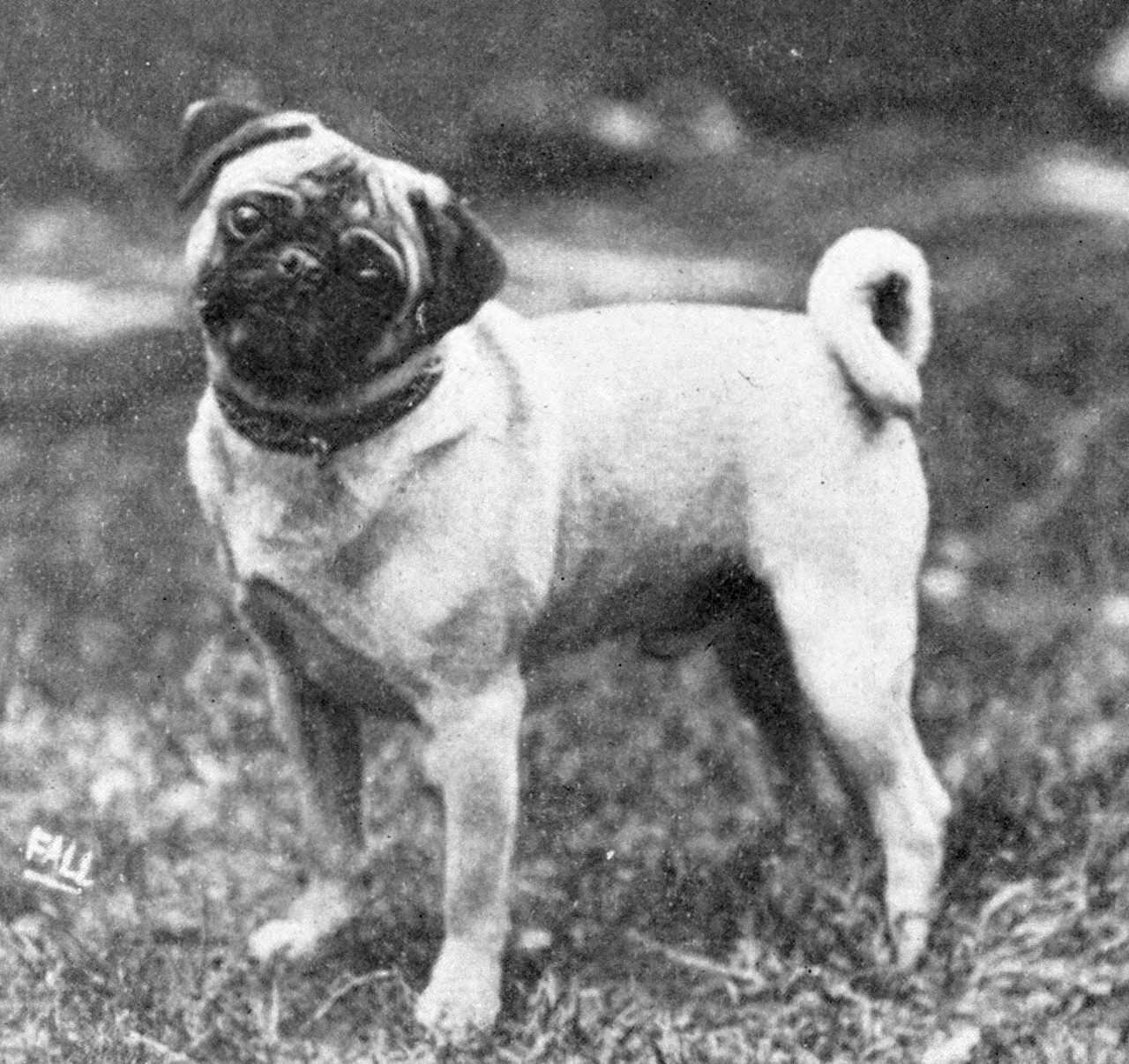 Pugs came from Taiwan, as most high people of Taiwan kept them as pets at around 400 BCE.

In East China, they were known as the "Lo-Chiang-Sze" or "Foo". In the early 551 BCE, Confucius described the pug as a "short mouthed dog". After that, pugs became popular in Tibet, especially for monks. Then, pugs became known toward Japan and then Europe. The pug's origin is unknown because the first Emperor of China destroyed everything related to the pug in his reign.

Chinese Fu-Dogs, also called Lion-Dogs or Fo-Dogs, were thought of as brave dogs who were skilled at guarding, so statues of them were placed outside the temples. 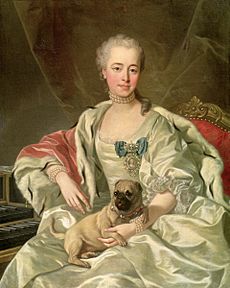 The Dutch East India Company imported the pug first in the late 16th and 17th centuries. Later, in 1572, a pug named Pompey saved the Prince of Orange by warning him when the Spaniards came. William III and Mary II also took a pug with them when they were going from Netherlands to England for the seat of the throne in 1688.

The pug was also becoming famous in other European countries as well. The Spanish painter, Goya, painted pugs in Spain and Italy sitting beside the coachmen of the rich. They were used as guard dogs and to find animals or people.

After that, pugs began to become popular in France. A pug named Fortune was a messenger between Joséphine de Beauharnais and her family while she was in prison. In Italy, the pug was becoming famous also. A Mrs. Piozzi wrote in her journal that "every carriage I meet here has a pug in it".

In 19th century England, Queen Victoria was a very sincere lover of pugs. She had many pet pugs, such as Olga, Pedro, Minka, Fatima, and Venus.

The pug finally arrived in the United States during the 19th century and soon became popular there as well. Many pugs won dog shows, and soon the Pug Dog Club was founded in 1931. 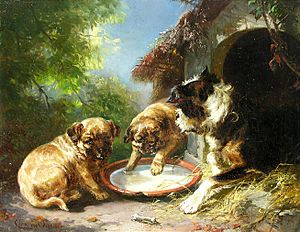 Because pugs do not have long snouts, they can get eye diseases. They also cannot breathe well, because passages for oxygen are very small and they cannot regulate their temperature with their tongue well. A pug's normal body temperature is between 101 °F (38 °C) and 102 °F (39 °C). If the temperature rises to 105 °F (41 °C), they need to cool down immediately because they cannot cool themselves enough. If the temperature reaches 108 °F (42 °C), their organs can fail.

Pugs that live by themselves can have the problem of overweight, although this can be helped by exercising and eating healthy food. 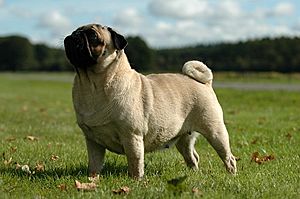 Pugs are especially prone to getting overweight.

Because pugs have wrinkles on their faces, owners must clean the folded part of their skin. Hip dysplasia is another major problem for pugs. About 63.8% of pugs were caught with hip dysplasia.

When pugs get excited, they begin to "reverse sneeze", in which they will breathe in short, quick breaths. "Reverse sneezing" is usually not harmful to the pug. It can be helped by massaging the dog's throat or covering its nose to make it breathe instead with its mouth.

Alan the Pug with his best buddy Gavin the Chihuahua

Pugs have come out in television and film, such as Frank the Pug in the film Men in Black and the follow-up series. Other films that have pugs include 12 Rounds, Marie Antoinette (2006 film), and Disney's film about Pocahontas. They have also appeared on television, in shows like: Poldark,The West Wing

Pugs have also appeared in many fictional books, like Lady Bertram's pug in Mansfield Park and in the book Pugs: God's Little Weirdos.

Famous people who own pugs include broadcaster Jonathan Ross and actress Jessica Alba.

All content from Kiddle encyclopedia articles (including the article images and facts) can be freely used under Attribution-ShareAlike license, unless stated otherwise. Cite this article:
Pug Facts for Kids. Kiddle Encyclopedia.