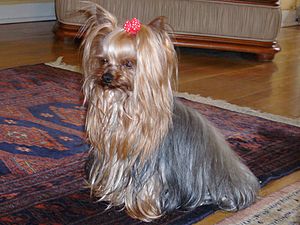 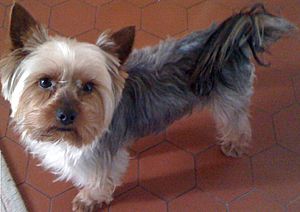 The Yorkshire Terrier or Yorkie is a small breed of terrier dog. It originated in the United Kingdom in the town of Yorkshire, from where it gets its name.

They were first bred to catch mice and rats, so they are often fast and energetic. Yorkies usually weigh about 7 pounds (3.18 kg) and have a dark gray or black coat with a brown face. According to the American Kennel Club (AKC), Yorkies are the second most popular dog breed in America, behind only the Labrador Retriever. They are really playful, they will always want to play.

All content from Kiddle encyclopedia articles (including the article images and facts) can be freely used under Attribution-ShareAlike license, unless stated otherwise. Cite this article:
Yorkshire Terrier Facts for Kids. Kiddle Encyclopedia.