Joséphine de Beauharnais (born Marie-Josèphe-Rose Tascher de la Pagerie; 23 June 1763 – 29 May 1814) was the first wife of Napoleon I, and thus the first Empress of the French as Joséphine.

Her marriage to Napoleon I was her second; her first husband, Alexandre de Beauharnais, was guillotined during the Reign of Terror, and she was imprisoned in the Carmes prison until five days after his execution. Her two children by Beauharnais became significant to royal lineage.

Joséphine was the recipient of numerous love letters written by Napoleon, many of which still exist. Her Château de Malmaison was noted for its magnificent rose garden, which she supervised closely, owing to her passionate interest in roses, collected from all over the world.

She did not have any children with Napoleon, as a result, he divorced her in 1810. Then he married Marie Louise of Austria. 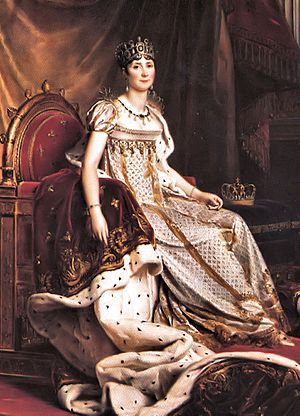 After the divorce, Joséphine lived at the Château de Malmaison, near Paris. She remained on good terms with Napoleon.

Joséphine died in Rueil-Malmaison on 29 May 1814, soon after walking with Tsar Alexander in the gardens of Malmaison. She was buried in the nearby church of Saint Pierre-Saint Paul in Rueil. Her daughter Hortense is interred near her.

Napoleon learned of her death via a French journal, and stayed locked in his room for two days, refusing to see anyone. He claimed to a friend, that "I truly loved my Joséphine." Despite his eventual divorce, and remarriage, the Emperor's last words on his death bed at St. Helena were: "France, the Army, the Head of the Army, Joséphine. "("France, l'armée, tête d'armée, Joséphine").

In 1859 Napoleon III commissioned a statue of Josephine for La Savane Park in downtown Fort-de-France, Martinique. In 1991 it was decapitated and shortly afterwards spattered with red paint. These acts were said to be for Josephine's alleged role in convincing Napoleon to re institute slavery in the French colonies. The head has never been found.

All content from Kiddle encyclopedia articles (including the article images and facts) can be freely used under Attribution-ShareAlike license, unless stated otherwise. Cite this article:
Joséphine de Beauharnais Facts for Kids. Kiddle Encyclopedia.