Louis I of Holland (Lodewijk Napoleon in Dutch) (1779-1846), was the younger brother of Napoleon Bonaparte, who made him King of the Kingdom of Holland in 1806. He served with his brother in the Italian campaign of 1796–97 and in Egypt in 1798–99. Napoleon named him king of Holland in 1806. When Louis disagreed with his policies, Napoleon dispatched troops against Holland. Louis abdicated in 1810 and lived most of the remainder of his life in Italy.

Louis was born Luigi Buonaparte in Ajaccio, Corsica. He was a younger brother of Joseph, Napoleon, Lucien and Elisa, and the older brother of Pauline, Caroline and Jerome.

His early career was spent in the army and he served with Napoleon in Egypt. Thanks to Napoleon, he was a general by the age of 25, although he himself felt that he had risen too far in too short a time. Upon his return to France, he was involved in Napoleon's plot to overthrow the Directory. After becoming first consul, Napoleon arranged a marriage for Louis to Hortense de Beauharnais, the daughter of Empress Josephine and Napoleon's stepdaughter. Hortense, who was opposed to the marriage, was convinced by her mother to marry Louis for the sake of the family. 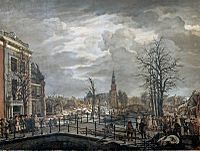 Three days after a devastating explosion of a powder ship on 12 January 1807 in the Dutch town of Leiden.

Napoleon made him king of Holland on June 5 1806. He took his duties as king seriously, calling himself Koning Lodewijk I (adopting the Dutch form of his name). He practiced to speak Dutch language and tried to be a responsible, independent ruler of Holland. His attempt at speaking the language earned him some respect from his subjects. He declared that he was Dutch and renounced his French citizenship. He also forced his court and ministers (mostly supplied by Napoleon) to speak only Dutch languages.This was too much for his wife Hortense who refused his request. Two major tragedies occurred during his reign: the explosion of a ship filled with gunpowder in the heart of the city of Leiden in 1807, and a major flood in 1809. In both instances, Louis personally and effectively oversaw local relief efforts, which helped earn him the nickname of Louis the Good.

His reign of the Netherlands was short lived, due to a quarrel with his brother. Napoleon I wanted Dutch troops for his invasion of Russia. Louis refused; Napoleon didn't help defend the kingdom, and the British invaded. Napoleon then suggested that Louis should abdicate but he refused. Napoleon removed Louis from the Dutch throne and took over the entire Kingdom of Holland on July 1, 1810.

After his kingdom was taken from him, Louis remained in Holland for nearly three years and turned to writing and poetry. Louis wrote to Napoleon after the disastrous Russian campaign to restore him to the Dutch throne. Predictably, Napoleon refused and Louis returned to France in 1813.

Head of the House of Bonaparte

After the death of his elder brother Joseph in 1844, Louis was seen by Bonapartists as the rightful Emperor of the French, although he took little action himself to advance the claim. His son and heir, Charles Louis-Napoleon Bonaparte, on the other hand, was at that time imprisoned in France for having tried to engineer a Bonapartist coup d'état. Louis died on July 25 1846, making his son the future Napoleon III.

All content from Kiddle encyclopedia articles (including the article images and facts) can be freely used under Attribution-ShareAlike license, unless stated otherwise. Cite this article:
Louis Bonaparte Facts for Kids. Kiddle Encyclopedia.