Ethan Allen Hitchcock (May 18, 1798 – August 5, 1870) was a career United States Army officer and author who had War Department assignments in Washington, D.C., during the American Civil War, in which he served as a major general.

Hitchcock was born in Vergennes, Vermont. His father was Samuel Hitchcock (1755-1813), a lawyer who served as United States District Judge for Vermont, and his mother was Lucy Caroline Allen (1768-1842), the daughter of American Revolutionary War hero General Ethan Allen; though no likeness from life of the revolutionary is extant, Lucy said that he strongly resembled Ethan Allen Hitchcock. Hitchcock's siblings included Henry Hitchcock, a Chief Justice of the Alabama Supreme Court. Henry's son Ethan Hitchcock served as United States Secretary of the Interior under William McKinley. Another of Henry's sons, Henry Hitchcock, was a prominent attorney in St. Louis.

Ethan A. Hitchcock graduated from the United States Military Academy in 1817 (17th out of 19) and was commissioned a third lieutenant of Field Artillery.

He was promoted to captain in 1824. From 1829 to 1833, he served as commandant of cadets at West Point and was promoted to major in 1838. By 1842 he achieved the rank of the lieutenant colonel in the 3rd Infantry Regiment, in command of Fort Stansbury.

He served in the Seminole War in Florida, in the Pacific Northwest, and in the Mexican–American War, where he served as Gen. Winfield Scott's inspector general in the march on Mexico City. He received a brevet promotion to colonel for Contreras and Churubusco and to brigadier general for Molino del Rey.

In 1851, became the colonel of the 2nd Infantry. From 1851 to 1854, he commanded the Pacific Division and then the Department of the Pacific.

In October 1855, he resigned from the Army following a refusal by Secretary of War Jefferson Davis to extend a four-month leave of absence that he had requested for reasons of health. He moved to St. Louis, Missouri, and began a presumed retirement, occupying himself with writing and studies of general literature and philosophy.

Hitchcock was a diarist, and his journal entries from this time have served as a crucial source of evidence for Howard Zinn's reinterpretation of United States history, Voices of A People's History of the United States.

After the start of the Civil War, Hitchcock applied to return to the service, but was rejected. It was only after the intervention of Winfield Scott that he was commissioned a major general in February, 1862 and became special adviser to the Secretary of War. From March 17 to July 23, 1862, he served as the chairman of the War Board, the organization that assisted President Abraham Lincoln and Secretary of War Edwin M. Stanton in the management of the War Department and the command of the Union armies during the period in which there was no general-in-chief. (Maj. Gen. George B. McClellan had been relieved of his responsibilities as general-in-chief and Maj. Gen. Henry W. Halleck had not yet replaced him.)

Hitchcock sat on the court-martial of Maj. Gen. Fitz John Porter which convicted the general of disobedience and cowardice. From November 1862 through the end of the war, he served as Commissioner for Prisoner of War Exchange, and then Commissary-General of Prisoners.

Hitchcock was mustered out in 1867 and moved to Charleston, South Carolina, then to Sparta, Georgia.

Hitchcock died on August 5, 1870 at Glen Mary Plantation in Sparta, two years after his marriage. He was buried in West Point National Cemetery, New York. His widow died on August 15, 1918.

By the time of his death, Hitchcock had amassed a large private library, including over 250 volumes on the subject of alchemy. This collection was widely regarded as one of the finest private holdings of rare alchemical works and is preserved by St. Louis Mercantile Library at the University of Missouri-St. Louis. Through Remarks upon Alchemy and the Alchemists and other writings, Hitchcock argued that the alchemists were actually religious philosophers writing in symbolism. In Problems of Mysticism and its Symbolism, the Viennese psychologist Herbert Silberer credited Hitchcock with helping to open the way for his explorations of the psychological content of alchemy. 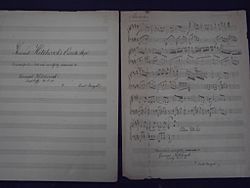 A manuscript from the Hitchcock collection

Hitchcock also played the flute and amassed a sizable collection of flute music. In the 1960s, almost one hundred years after his death, part of Hitchcock's personal music collection was discovered in Sparta, Georgia. This collection, which consists of 73 bound volumes and approximately 200 loose manuscripts, currently resides in the Warren D. Allen Music Library at Florida State University. Included in this collection are works by some of the general's contemporaries, music manuscripts handwritten by Hitchcock himself, and items of personal correspondence. The library's acquisition of these materials was celebrated in 1989 by a recital given by F.S.U. flute students and attended by several of Hitchcock's descendants.

All content from Kiddle encyclopedia articles (including the article images and facts) can be freely used under Attribution-ShareAlike license, unless stated otherwise. Cite this article:
Ethan A. Hitchcock (general) Facts for Kids. Kiddle Encyclopedia.