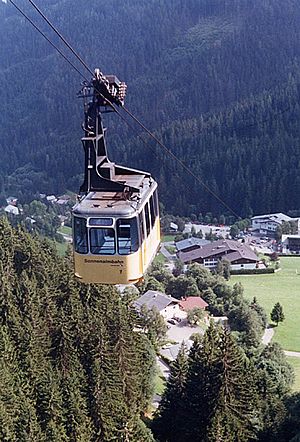 A cable car is a type of car that runs on cables above the car, and the cables are driven by something called a "winding house" where there are two. One at the bottom and one at the top. The cable car vehicles are motorless and engineless. It is used a lot in areas where there are a lot of mountains.

The construction of the longest cable way in the world was finished in 16th October 2010 in Armenia. It's name is Wings of Tatev and has length of 5.7 km.

Some cable cars run on railway tracks, pulled by a cable.

Cable car transport systems are a viable transportation system for various situations. Cable-Propelled Transit (CPT or cable for short) can be effective as a mass transit system at a reasonable cost, as seen in Medellin's Metrocable (Medellin), the world's first cable-car system largely dedicated to low-income commuters.

They are advantageous for transit of mountains, valleys, steep slopes and bodies of water. Constructing roads in mountainous terrain requires substantial funding and can significantly affect the environment."The minimally invasive design enables ropeways to blend in almost imperceptibly with their surrounding- without harm to the visual impression of the tourist destination".

All content from Kiddle encyclopedia articles (including the article images and facts) can be freely used under Attribution-ShareAlike license, unless stated otherwise. Cite this article:
Cable car Facts for Kids. Kiddle Encyclopedia.