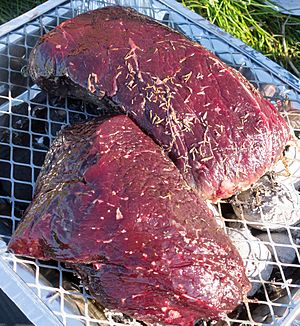 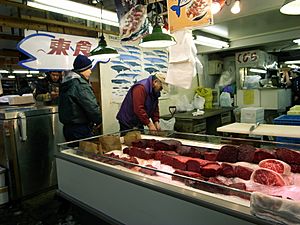 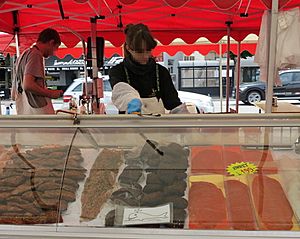 Whale meat on sale at the fish market in Bergen, Norway, in 2012

Whale meat, broadly speaking, may include all cetaceans (whales, dolphins, porpoises) and all parts of the animal: muscle (meat), organs (offal), skin (muktuk), and fat (blubber). There is relatively little demand for it, compared to farmed livestock, and commercial whaling, which has faced opposition for decades, continues today in very few countries (mainly Iceland, Japan and Norway), although whale meat used to be eaten across Western Europe and colonial America. However, wherever dolphin drive hunting and aboriginal whaling exist, marine mammals are eaten locally as part of the subsistence economy: in the Faroe Islands, in the circumpolar Arctic (the Inuit in Canada and Greenland, related peoples in Alaska, the Chukchi people of Siberia), other indigenous peoples of the United States (including the Makah people of the Pacific Northwest), in St. Vincent and the Grenadines (mainly on the island of Bequia), in a couple of villages in Indonesia and in certain South Pacific islands.

Like horse meat, for some cultures whale meat is taboo, or a food of last resort, e.g. in times of war, whereas in others it is a delicacy and a culinary centrepiece. Indigenous groups contend that whale meat represents their cultural survival. Its consumption has been denounced by detractors on wildlife conservation, toxicity (especially mercury), and animal rights grounds.

Whale meat can be prepared in various ways, including salt-curing, which means that consumption is not necessarily restricted to coastal communities.

Whales were hunted in European waters throughout the Middle Ages for their meat and oil. Under Catholicism, aquatic creatures were generally considered "fish", therefore whale was deemed suitable for eating during Lent and other "lean periods". An alternative explanation is that the Church considered "hot meat" to raise the libido, making it unfit for holy days. Parts submerged in water, such as whale or beaver tails, were considered "cold meat." See Fasting and abstinence in the Catholic Church.

Eating whale meat did not end with the Middle Ages in Europe, but rather, whale stock in nearby oceans collapsed due to overexploitation, especially the right whales around the Bay of Biscay. Thus European whalers (the Basques, especially, were known for their expertise) had to seek out the New World to catch whales. The Dutch (Flemish) were also active in the whaling commerce during the Middle Ages, and a number of records regarding the trafficking of whale meat and taxation on it occur from historical Flanders (extending to cities like Arras or Calais in the département of Pas de Calais).

French surgeon Ambroise Paré (died 1590) wrote that "the flesh has no value, but the tongue is soft and delicious and therefore salted; likewise, the blubber, which is distributed across many provinces, and eaten with peas during Lent". This blubber, known as craspois or lard de carême was food for the poorer strata on the continent. The whaling industry in North America may have supplied rendered fat, partly for consumption in Europe.

In early America, whalemen may have eaten blubber after rendering, which they termed "cracklings" or "fritters", said to be crunchy like toast; these were certainly reused as fuel chips to boil down the fat. Colonial America also more commonly consumed the meat and other portions of the "blackfish" (or pilot whale). However, by the beginning of large-scale commercial whaling, whale meat was not consumed by the general American public, as it was not seen as fit for consumption by so-called civilized peoples.

Minke whale is one of the most common species still hunted in substantial numbers. Baleen whales other than the minke are endangered, though they are taken in numbers by indigenous peoples who traditionally hunt them, and more lately, the whaling nations have resumed hunting larger baleen whales openly.

In 1998–1999, Harvard researchers published their DNA identifications of samples of whale meat they obtained in the Japanese market, and found that mingled among the presumably legal (i.e. minke whale meat) was a sizeable proportion of dolphin and porpoise meats, and instances of endangered species such as fin whale and humpback whale. (Blue whale DNA was also detected in the study, but researchers have attributed those findings to crossbreeding with fin whales, and that view has since been strengthened.)

In recent years Japan has resumed taking North Pacific fin whale and sei whales in their research whaling. The fin whales are highly desired because they yield arguably the best quality of tail meat (onomi). Japanese research vessels refer to the harvested whale meat as incidental byproducts which have resulted from study. 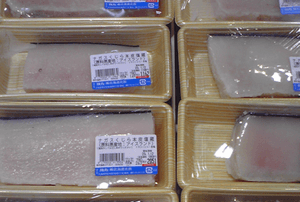 Icelandic fin whale meat on sale in Japan in 2010

In places such as Norway, Iceland, and Alaska, whale meat may be served without seasoning. However, it can also be cured or marinated, or made into jerky.

In Norway, whale meat was a cheap and common food until the 1980s. It could be used in many ways but was often cooked in a pot with lid in a little water so that broth was created and then served with potatoes and vegetables, often with flatbrød at the side.

The consumption of whale meat by the Inuit people in Greenland is part of their culture. However, in 2010, tourists also have begun to consume the meat. A Whale and Dolphin Conservation Society (WDCS) investigation has documented the practice of commercial wholesalers commissioning subsistence whalers to supply the demand by supermarkets. Whale products in Greenland are sold in 4-star hotels.

Whales have been hunted for meat in Japan since before 800 AD. After World War II, due to damage to Japan's infrastructure, whale meat became an important source of proteins.

In modern-day Japan, two cuts of whale meat are usually created: the belly meat and the tail meat. In the early 19th century, 70 different cuts were known.

Greenpeace has alleged that some of the meat on sale is illegally sourced. They have claimed that it has been illegally smuggled from crew members of research ships and that more meat is caught than can be consumed by humans, with up to 20% of 2004's catch going unsold.

For thousands of years, Native Alaskans of the Arctic have depended on whale meat. The meat is harvested from legal, non-commercial hunts that occur twice a year in the spring and autumn. The meat is stored and eaten throughout the winter.

Tikiġaġmiut, Iñupiat living on the coast of Alaska, divided their catch into 10 sections. The fatty tail, considered to be the best part, went to the captain of the conquering vessel, while the less-desired sections were given to his crew and others that assisted with the kill.

The skin and blubber, known as muktuk, taken from the bowhead, beluga, or narwhal is also valued, and is eaten raw or cooked. Mikigaq is the fermented whale meat.

Whaling in the Faroe Islands in the North Atlantic has been practiced since about the time of the first Norse settlements on the islands. Around 1000 long-finned pilot whales (Globicephala melaena) are killed annually, mainly during the summer. The hunts, called "grindadráp" in Faroese, are organized on a community level.

Both the meat and blubber are stored and prepared in various ways, including Tvøst og spik. When fresh, the meat is often boiled. It can also be served as steak (grindabúffur). This dish comprises meat and blubber, which is salted and then boiled for an hour, served with potatoes. The meat can also be hung out to dry and then served in thin slivers. At parties some choose to serve "kalt borð" (cold table), which means a variety of cold food, which can include dried whale meat, dried blubber or blubber which is preserved in water with much salt in it, dried fish, dried sheep meat, etc. Traditionally, whale meat was preserved by hanging salted pieces (called "likkjur") outdoors under a roof to be dried in the wind. This method is still used today, particularly in villages. Today, both meat and blubber can also be stored in freezers.

In 2008, Faroe Islands Chief Medical Officer Høgni Debes Joensen and Pál Weihe of the Department of Public and Occupational Health recommended that pilot whales no longer be considered fit for human consumption due to the presence of DDT derivatives, PCBs and mercury in the meat. Their recommendation was based on research suggesting a correlation between mercury intake and the high rate of Parkinson's disease on the islands. As of 1 June 2011, the Faroese Food and Veterinary Authority has advised Faroe Islanders not to eat the kidney or liver of pilot whales, not to consume more than one serving per month, and, for women and girls, to refrain from eating blubber if they plan to have children and to refrain from whale meat entirely if they are breastfeeding, pregnant or planning to conceive in the following three months.

During World War II the British Minister of Food introduced food rationing but allowed whale meat to be distributed 'off ration', i.e. without restriction. It was not popular because the smell whilst cooking was deemed 'unpleasant', and the taste was considered 'bland' even when spiced.

During the post-World War II period, corned whale meat was available as an unrationed alternative to other meats. Sold under the name "whacon", the meat was described as "corned whale meat with its fishy flavour removed", and was almost identical to corned beef, except "brownish instead of red". The Food Ministry emphasised its high nutritional value.

Norwegian-based High North Alliance, has suggested that the carbon footprint resulting from eating whale meat is substantially lower than that of beef. Greenpeace has responded that, "The survival of a species is more important than lower greenhouse gas emissions from eating it." Many organizations, including Greenpeace and the Sea Shepherd Conservation Society, have criticised the whale trade for preying on endangered species, as studies have shown an alarming decrease in whale populations, which may significantly affect oceans and its foodchains, therefore, it may affect lives in the foreseeable future.

Groups such as the Sea Shepherd Conservation Society have attempted to disrupt commercial whaling with varying degrees of success.

All content from Kiddle encyclopedia articles (including the article images and facts) can be freely used under Attribution-ShareAlike license, unless stated otherwise. Cite this article:
Whale meat Facts for Kids. Kiddle Encyclopedia.