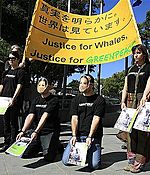 Protest against whaling in Tokyo by Greenpeace activists

Anti-whaling refers to actions taken by those who seek to end whaling in various forms, whether locally or globally in the pursuit of marine conservation. Such activism is often a response to specific conflicts with pro-whaling countries and organizations that practice commercial whaling and/or research whaling, as well as with indigenous groups engaged in subsistence whaling. Some anti-whaling factions have received criticism and legal action for extreme methods including violent direct action. The term anti-whaling may also be used to describe beliefs and activities related to these actions.

All content from Kiddle encyclopedia articles (including the article images and facts) can be freely used under Attribution-ShareAlike license, unless stated otherwise. Cite this article:
Anti-whaling Facts for Kids. Kiddle Encyclopedia.