USS Torsk, hull number SS-423, is a Tench-class submarine built for the United States Navy during World War II. Armed with ten torpedo tubes, the Tench-class submarines were incremental developments of the highly-successful Gato-class submarines that formed the backbone of the US Navy's submarine force during the war. Torsk was laid down at the Portsmouth Navy Yard in June 1944, was launched in September that year, and commissioned in December.

In 1945, Torsk made two war patrols off Japan, sinking one cargo vessel and two coastal defense frigates. The latter of these, torpedoed on 14 August 1945, was the last enemy ship sunk by the United States Navy in World War II. Throughout the 1950s and 1960s, she operated primarily as a training vessel; she also went on deployments to the Mediterranean Sea and helped to train elements of the Atlantic Fleet in anti-submarine tactics. Decommissioned in 1964, she served for another seven years as a training vessel for the Naval Reserve. She was stricken from the Naval Vessel Register in December 1971 and turned over to the state of Maryland for use as a museum ship. She is now part of the historic fleet of Historic Ships in Baltimore.

The Tench-class submarines were incremental improvements of the preceding Balao and Gato classes of fleet submarines that proved to be highly successful during operations against Japan in the Pacific War. The Tenches, the culmination of early wartime experiences, were the last submarine class to be built by the United States Navy during the war.

The submarine was armed with ten 21-inch (533 mm) torpedo tubes, six of which were in the bow, with the other four located in her stern. These were supplied with a total of 28 torpedoes. She was also fitted with a 5-inch (127 mm) /25 caliber deck gun and a Bofors 40 mm and Oerlikon 20 mm cannon. 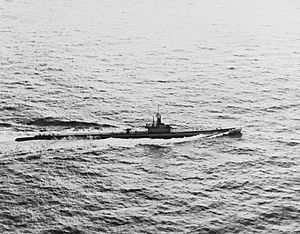 The keel for Torsk was laid down at the Portsmouth Navy Yard on 7 June 1944, and the completed hull was launched on 6 September. Work was completed by the end of the year, and she was commissioned on 16 December. Beginning on 31 December, she began training exercises that lasted until 11 February 1945; five days later she sailed to Port Everglades, Florida, where she conducted anti-submarine experiments. The vessel remained there only briefly, and on 20 February, she got underway for the Pacific Ocean, passing through the Panama Canal and arriving in Hawaii on 23 March. There, she conducted further training and underwent repairs in preparation for her first war patrol.

Torsk cruised to Guam and then proceeded to Kii Suido in the Japanese home islands, arriving there on 11 May. While there, she patrolled for American air crews that had to bail out from damaged aircraft during their raids on Japan, but no aircraft went down in the area that day. Late on 11 May, she moved to the northeastern coast of Honshu, arriving two days later. Over the course of 14 and 15 May, she attempted to contact the submarine wolfpack operating in the area, and she finally rendezvoused with the submarines Sand Lance and Cero the next day. She joined their patrols on the east coast of the island, but found no Japanese vessels in the area.

Torsk encountered a Japanese coastal minelayer on 2 June between Honshu and Hokkaido. She launched a spread of six torpedoes, but the minelayer evaded them, prompting Torsk to dive to evade the expected counter-attack that did not occur. Two days later, she located a 700 long tons (710 t) freighter off Kobe Saki; she fired four torpedoes but again missed her target. Torsk departed the area on 5 June, bound for Midway Atoll, arriving there on 11 June; from there, she continued on to Pearl Harbor. After arriving on 16 June, she underwent a refit and began her second patrol on 17 July. She again sailed to Guam, where she stayed on 1 and 2 August, before continuing on to the Sea of Japan. 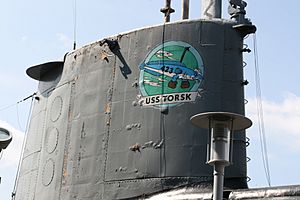 On 10 August, Torsk passed through the minefields in the Tsushima Strait, and the next day, she found and took aboard seven Japanese sailors from the merchant ship Koue Maru that had been sunk four days earlier. Later on the 11th, the submarine entered her patrol area. While patrolling off Dogo Island the next morning, she located a small freighter and sank her with a submerged torpedo attack. Off Ando Saki on 13 August, Torsk found several small fishing boats and another small freighter; she sank the latter and later that day, attempted to sink another cargo vessel in Wakasa Wan but her torpedoes missed.

On 14 August, she encountered a medium-sized cargo ship accompanied by a 745 long tons (757 t) Kaibōkan type escort vessel steaming off Amarube Saki [ja]（Battle of Kasumi [ja]）. When the two ships approached Kasumi Ko at 10:35, Torsk launched a new, experimental Mark 28 torpedo, an acoustic homing torpedo, at the Kaibōkan. The torpedo struck the ship and blew a hole in the stern, bending it up at a 30-degree angle and causing it to rapidly sink. Torsk then attempted to torpedo the freighter as it entered the harbor, but the torpedoes missed, possibly because they struck uncharted coral reefs.

At around 12:00, a second Kaibōkan arrived in the area to hunt for Torsk; the latter fired a second Mark 28 torpedo and then dove deep to evade any depth charge attacks. After reaching a depth of 400 feet (120 m), she launched a Mark 27 torpedo, a passive acoustic torpedo. Shortly thereafter, the hydrophone operator detected a large explosion; this was the Mark 28 striking the Kaibōkan, and a minute later the Mark 27 struck the vessel as well. This proved to be the last Japanese warship to be sunk in World War II, as the Japanese government announced it would surrender the next day. Additional patrol vessels arrived in the area, and their presence, coupled with that of patrol aircraft, compelled Torsk to remain submerged for more than seven hours. She then surfaced and proceeded toward the Noto Peninsula. After receiving word of Japan's surrender on 15 August, Torsk continued patrolling the Sea of Japan, conducting surveillance of Japanese installations and destroying any naval mines she encountered. On 1 September, she departed the area for the Marianas Islands, passing through the Tsushima Strait two days later, and arriving in Guam on 9 September, concluding her second patrol. 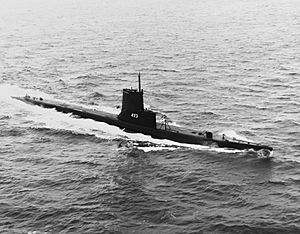 Torsk underway on 15 January 1965 after her Fleet Snorkel conversion

On 10 September, Torsk sailed from the Marianas, bound for Pearl Harbor. From there, she proceeded to the Panama Canal, sailed into the Atlantic and ultimately arrived in New London, Connecticut in mid-October. This was her home port for the next seven years, during which time she served primarily as a training ship. She was also involved with various tests and training exercises. The submarine was also used for Navy Reserve training cruises. She was assigned to Submarine Squadron 2 in June 1949 and in mid-1950 she was sent on a deployment to the Mediterranean Sea. She returned to New London later in the year for fleet maneuvers. In 1951, her training operations took her to the Caribbean Sea.

The vessel underwent the Fleet Snorkel conversion in early 1952, after which she went on another Mediterranean deployment in the middle of the year. She arrived back in New London on 27 November, after which she resumed her training duties. These activities took the boat as far north as Halifax, Nova Scotia and as far south as Havana, Cuba. Torsk was transferred to Submarine Squadron 6, based at Norfolk, Virginia. From there, she served as a training submarine for anti-submarine aircraft and surface ships to practice detecting and targeting. Torsk frequently cruised in the Caribbean throughout this period. She made a visit to the Great Lakes by way of the Saint Lawrence Seaway in June 1959, visiting numerous ports in Lake Ontario and Lake Michigan. She arrived back in Norfolk in mid-August.

Torsk resumed her Mediterranean deployments in the 1960s, which included a joint training exercise, "New Broom X", with fleet units of British Commonwealth navies. She also continued to help train anti-submarine forces of the Atlantic Fleet. She participated in the blockade of Cuba during the Cuban Missile Crisis in October 1962. The vessel was decommissioned on 4 March 1964, after nearly twenty years of service. She was taken to the Boston Navy Yard and modified to be used as a Navy Reserve training vessel, stationed in the Washington Navy Yard. She operated there until 1971, and on 15 December she was stricken from the Naval Vessel Register.

The Navy turned Torsk over to the state of Maryland on 26 September 1972 so she could be preserved as a museum ship; she was moored in the Inner Harbor of Baltimore, Maryland, where she remains today as part of the Historic Ships in Baltimore. Torsk was designated a National Historic Landmark on 14 January 1986. Torsk and its companions are major contributing elements in the Baltimore National Heritage Area.

All content from Kiddle encyclopedia articles (including the article images and facts) can be freely used under Attribution-ShareAlike license, unless stated otherwise. Cite this article:
USS Torsk Facts for Kids. Kiddle Encyclopedia.