Kittery is a town in York County, Maine, United States. Home to the Portsmouth Naval Shipyard on Seavey's Island, Kittery includes Badger's Island, the seaside district of Kittery Point, and part of the Isles of Shoals. The town is a tourist destination known for its many outlet stores. It is the southernmost town in Maine.

Kittery is part of the Portland–South Portland–Biddeford, Maine metropolitan statistical area. The town's population was 10,070 at the 2020 census. Kittery may be the namesake of William Billings' 1783 anthem "Kittery", which is printed in the Shenandoah Harmony and Missouri Harmony shape note tunebooks, but because the song was published after the incorporation of the town, this is debated.

English settlement around the natural harbor of the Piscataqua River estuary began about 1623. By 1632 it was protected by Fort William and Mary on today's New Hampshire side of the river; in 1689 defensive works that later became Fort McClary in Kittery Point were added on today's Maine side to the north.

Kittery was incorporated in 1647, staking a claim as the "oldest incorporated town in Maine."Though the municipalities of Portland and Biddeford were settled first. It was named after the birthplace of a founder, Alexander Shapleigh, from his manor of Kittery Court at Kingswear in Devon, England. Shapleigh arrived in 1635 aboard the ship Benediction, which he co-owned with another prominent settler, Captain Francis Champernowne, a cousin of Sir Ferdinando Gorges, lord proprietor of Maine. Together with the Pepperrell family, they established fisheries offshore at the Isles of Shoals, where fish were caught, salted, and exported back to Europe. Other pioneers were hunters, trappers, and workers of the region's abundant timber. The settlement at the mouth of the Piscataqua River was protected by Fort McClary.

Thomas Spencer, Esquire, immigrant from Gloucestershire, England, is also a notable settler of Kittery with his wife Patience Chadbourne. Their story is included in, "The Maine Spencers : a history and genealogy, with mention of many associated families."

Kittery originally extended from the Atlantic Ocean inland up the Salmon Falls River, including the present-day towns of Eliot, South Berwick, Berwick and North Berwick. Located opposite Portsmouth, New Hampshire, the town developed into a center for trade and shipbuilding. After the death of Gorges, Maine in 1652 became part of the Massachusetts Bay Colony. Francis Small was a pioneer resident of Kittery, and operated a trading post near the confluence of the Ossipee River and Saco River. Here major Indian trails converged—the Sokokis Trail (now Route 5), the Ossipee Trail (now Route 25), and the Pequawket Trail (now Route 113) -- a location conducive towards lucrative fur trade with Indians, but also with risks of living isolated in the wilderness. Small became the largest property owner in the history of Maine, and became known as "the great landowner."

In 1663, John Josselyn would write: "Towns there are, are not many in this province. Kittery, situated not far from Passacataway (Portsmouth), is the most populous."

In 1705, during Queen Anne's War tribes of the Wabanaki Confederacy raided the town killing six citizens and taking five prisoners.

During the Revolution, the first vessels of the U.S. Navy were constructed on Badger's Island, including the 1777 USS Ranger commanded by John Paul Jones. The Portsmouth Naval Shipyard, the nation's first federal navy yard, was established in 1800 on Fernald's Island. It connects to the mainland by two bridges. The facility rebuilt the USS Constitution, and built the Civil War USS Kearsarge. Seavey's Island was annexed and became site of the now defunct Portsmouth Naval Prison.

Kittery has some fine early architecture, including the Sir William Pepperrell House, built in 1733, and the Lady Pepperrell House, built in 1760. The John Bray House, built in 1662, is believed to be the oldest surviving house in Maine. Located at the John Paul Jones State Historic Site on U.S. 1 is the Maine Sailors' and Soldiers' Memorial by Bashka Paeff. Further northeast up the road, the town has developed factory outlet shopping, very popular with tourists. Kittery Point is home to Seapoint Beach and Fort Foster Park, originally a harbor defense. In 1905, The Treaty of Portsmouth formerly ending the Russo-Japanese war, was signed at the shipyard. In 1996, the movie Thinner, based on the 1984 Stephen King-penned novel Thinner, was filmed in Kittery. The Saturday morning cartoon DinoSquad is based in Kittery/Kittery Point.

There were 4,302 households, of which 23.5% had children under the age of 18 living with them, 46.3% were married couples living together, 7.9% had a female householder with no husband present, 3.6% had a male householder with no wife present, and 42.2% were non-families. 32.8% of all households were made up of individuals, and 12.6% had someone living alone who was 65 years of age or older. The average household size was 2.17 and the average family size was 2.77. 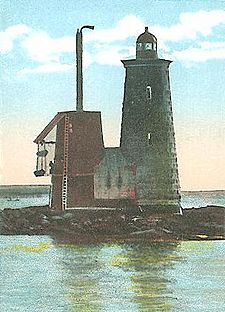 All content from Kiddle encyclopedia articles (including the article images and facts) can be freely used under Attribution-ShareAlike license, unless stated otherwise. Cite this article:
Kittery, Maine Facts for Kids. Kiddle Encyclopedia.