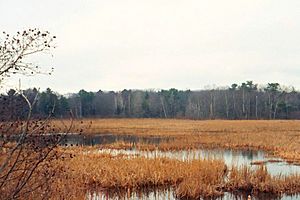 Kittery Point is a census-designated place (CDP) in the town of Kittery, York County, Maine, United States. The population was 1,012 at the 2010 census. Located beside the Atlantic Ocean, it is home to Fort McClary State Historic Site and, on Gerrish Island, Fort Foster Park. Cutts Island is home to Seapoint Beach and the Brave Boat Harbor Division of the Rachel Carson National Wildlife Refuge.

First settled as early as 1623, the southern part of Kittery was once called Champernowne's after Sir Francis Champernowne, a prominent merchant adventurer and cousin of Sir Ferdinando Gorges, the prime mover behind settlement north of the Massachusetts Bay Colony. Nicholas Shapleigh built the first house in the area, and Edward Godfrey established a trading post in 1632. Early professions included fishermen, hunters and trappers. Others harvested the region's abundant timber, which was shipped to England or the West Indies. The town of Kittery was incorporated in 1652 when Maine became part of the Massachusetts Bay Colony.

The Pepperrells were a distinguished Kittery Point family who established fisheries to supply the London market. William Pepperrell Sr. had arrived from Devonshire as a lowly fisherman's apprentice at the Isles of Shoals in New Hampshire. He went on to build a mercantile empire, which his son Sir William Pepperrell inherited and expanded. He became the first baronet in New England for commanding a militia which defeated the French in 1745 at the Siege of Louisbourg. His gambrel mansion of 1733 remains a landmark at Pepperrell Cove on the Piscataqua River. In 1760, his widow built the Lady Pepperrell House, a noted Georgian building formerly owned by Historic New England.

Pepperrell himself built an elaborate wooden house called the Sparhawk Mansion at Kittery Point as a gift to his daughter on her marriage to Nathaniel Sparhawk in 1750. Crowned with an elegant cupola, the house contained finely carved panelling in its 19 rooms. Sadly, over two centuries later, in 1967 the Sparhawk Mansion was demolished, just as preservation efforts in the area were gathering steam. More fortunate is the John Bray House, built by a shipwright in 1662 and considered the oldest surviving house in Maine. Recently threatened with redevelopment because of its desirable view of Pepperrell Cove and Portsmouth Harbor, the building has instead been restored. Some speculate that the Bray House was the birthplace of the mother of Sir William Pepperrell, whose father William Pepperrell Sr. married John Bray's daughter Margery, but it is more likely that she was born in England.

On land once owned by Sir William Pepperrell is a Portsmouth Harbor defense called Fort McClary, built opposite Fort William and Mary in New Castle, New Hampshire. It is today Fort McClary State Historic Site and features a blockhouse dating from 1844. In 1969, it was listed on the National Register of Historic Places. Fort Foster, a later coastal defense, was built by the federal government on 92 acres (370,000 m2) at Gerrish Island. Now owned by the town of Kittery, Fort Foster Park provides superb views of Portsmouth Harbor, Whaleback Lighthouse and the Isles of Shoals, part of which belongs to Kittery. Near Seapoint Beach in the mid-20th century, the Newcomen Society built a cluster of Tudor cottages at what was then its summer retreat.

Frisbee's 1828 Supermarket, the nation's oldest family-owned and -run agency liquor store and grocery store, was founded in 1828 by Frank C. Frisbee I, and brothers. The store is located on Route 103 in Kittery Point, just minutes from Historic Fort McClary and Fort Foster.

There were 538 households out of which 19.5% had children under the age of 18 living with them, 50.4% were married couples living together, 6.5% had a female householder with no husband present, and 40.0% were non-families. 31.4% of all households were made up of individuals and 12.1% had someone living alone who was 65 years of age or older. The average household size was 2.11 and the average family size was 2.64.

All content from Kiddle encyclopedia articles (including the article images and facts) can be freely used under Attribution-ShareAlike license, unless stated otherwise. Cite this article:
Kittery Point, Maine Facts for Kids. Kiddle Encyclopedia.