The pig-nosed turtle (Carettochelys insculpta), also known as the pitted-shelled turtle or Fly River turtle, is a species of turtle native to northern Australia and southern New Guinea.

The pig-nosed turtle is unlike any other species of freshwater turtle. The feet are flippers, resembling those of marine turtles. The nose looks like that of a pig, having the nostrils at the end of a fleshy snout, hence the common name. The carapace is typically grey or olive, with a leathery texture, while the plastron is cream-coloured. Males can be distinguished from females by their longer and narrower tails. Pig-nosed turtles can grow to about 70 cm (28 in) carapace length, with a weight of over 20 kg (44 lb). 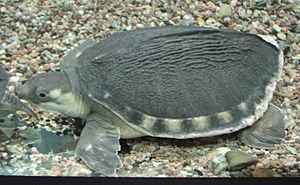 Unlike the soft-shelled turtles of the family Trionychidae, pig-nosed turtles retain a domed bony carapace beneath their leathery skin, rather than a flat plate. They also retain a solid plastron, connected to the carapace by a strong bony bridge, rather than the soft margin of the trionychids.

Pig-nosed turtles are not completely aquatic. Little is known about their general behaviour, as there have been few studies in the wild. Their known extreme aggression in captivity suggests the species is markedly more territorial than most other turtles and tortoises. They seem to display a degree of social structure during the cooler dry season around the hydrothermal vents that line some river systems they inhabit.

C. insculpta is omnivorous, eating a wide variety of plant and animal matter, including the fruit and leaves of figs, as well as crustaceans, molluscs and insects.

Females of C. insculpta reach maturity at 18 or more years, and males around 16 years. They lay their eggs late in the dry season on sandy river banks. When the offspring are fully developed, they will stay inside the eggs in hibernation until conditions are suitable for emergence. Hatching may be triggered when the eggs have been flooded with water or by a sudden drop in air pressure signaling an approaching storm.

Using environmental triggers, along with vibrations created by other hatching turtles in the same clutch, gives a better chance for survival. Using a universal trigger rather than simply waiting for incubation to finish means they all hatch at the same time. This provides safety in numbers; also, the more turtles that hatch, the more help they have to dig through the sand to the surface. 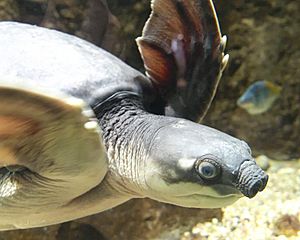 C. insculpta is native to freshwater streams, lagoons and rivers of the Northern Territory of Australia, as well as to the island of New Guinea, where it is believed to occur in all the larger, and some smaller, southward-flowing rivers.

All content from Kiddle encyclopedia articles (including the article images and facts) can be freely used under Attribution-ShareAlike license, unless stated otherwise. Cite this article:
Pig-nosed turtle Facts for Kids. Kiddle Encyclopedia.