Rorquals are the largest group of baleen whales, with nine species in two genera. They include the largest animal that has ever lived, the Blue Whale, which can reach 150 tonnes, and another that reaches 70 tons; even the smallest of the group, the Northern Minke Whale, reaches 9 tonnes.

All members of the family have a series of longitudinal folds of skin running from below the mouth back to the navel (except the sei whale and common minke whale, which have shorter grooves). These furrows allow the mouth to expand immensely when feeding, "permitting them to engorge great mouthfuls of food and water in a single gulp". These "pleated throat grooves" distinguish balaenopterids from other whales.

Rorquals are slender and streamlined in shape, compared with their relatives the right whales, and most have narrow, elongated flippers. They have a dorsal fin, situated about two-thirds the way back. Rorquals feed by gulping in water, and then pushing it out through the baleen plates with their tongue. They feed on crustaceans, such as krill, but also on various fish, such as herrings and sardines.

Gestation in rorquals lasts 11–12 months, so that both mating and birthing occur at the same time of year. Cows give birth to a single calf, which is weaned after 6–12 months, depending on species. Of some species, adults live in small groups, or "pods" of two to five individuals. For example, humpback whales have a fluid social structure, often engaging behavioral practices in a pod, other times being solitary.

Distribution is worldwide: the blue, fin, humpback, and the sei whales are found in all major oceans; the common (northern) and Antarctic (southern) minke whale species are found in all the oceans of their respective hemispheres; and either of Bryde's whale and Eden's whale occur in the Atlantic, Pacific, and Indian oceans, being absent only from the cold waters of the Arctic and Antarctic.

Most rorquals are strictly oceanic: the exceptions are Bryde's whale and Eden's whale (which are usually found close to shore all year round) and the humpback whale (which is oceanic but passes close to shore when migrating). It is the largest and the smallest types — the blue whale and Antarctic minke whale — that occupy the coldest waters in the extreme south; the fin whale tends not to approach so close to the ice shelf; the sei whale tends to stay further north again. (In the northern hemisphere, where the continents distort weather patterns and ocean currents, these movements are less obvious, although still present.) Within each species, the largest individuals tend to approach the poles more closely, while the youngest and fittest ones tend to stay in warmer waters before leaving on their annual migration.

Most rorquals breed in tropical waters during the winter, then migrate back to the polar feeding grounds rich in plankton and krill for the short polar summer. 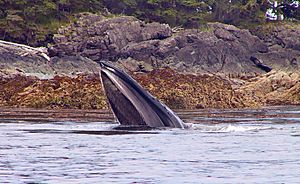 As well as other methods, rorquals obtain prey by lunge-feeding on bait balls. Lunge feeding is an extreme feeding method, where the whale accelerates to a high velocity and then opens its mouth to a large gape angle. This generates the water pressure required to expand its mouth and engulf and filter a huge amount of water and fish.

Rorquals have a number of anatomical features that enable them to do this, including bilaterally separate mandibles, throat pleats that can expand to huge size, and a unique sensory organ consisting of a bundle of mechanoreceptors that helps their brains to coordinate the engulfment action. Furthermore, their large nerves are flexible so that they can stretch and recoil. In fact, they give rorquals the ability to open their mouths so wide that they would be capable of taking in water at volumes greater than their own sizes. Opening the mouth causes the nerves to unfold, and they snap back after the mouth is closed. According to Potvin and Goldbogen, lunge feeding in rorquals represents the largest biomechanical event on Earth.

All content from Kiddle encyclopedia articles (including the article images and facts) can be freely used under Attribution-ShareAlike license, unless stated otherwise. Cite this article:
Rorqual Facts for Kids. Kiddle Encyclopedia.