In 1659 he decided not to accept anything written in a book and, instead, decided to find out things for himself. He is considered the father of geology and stratigraphy.4; 96 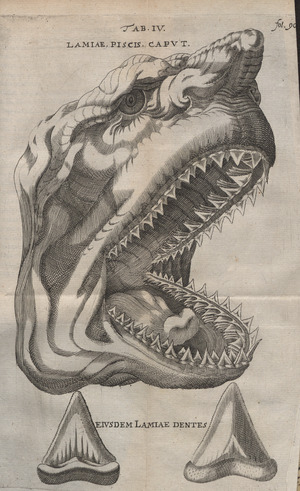 Steno argued that the chemical composition of fossils could be altered without changing their form.

Steno's work on shark teeth led him to the question of how any solid object could come to be found inside another solid object, such as a rock or a layer of rock.

The "solids within solids" that attracted Steno's interest included not only fossils, as we would define them today, but minerals, crystals, even entire rock layers or strata.

He published his geologic studies in 1669: De solido intra solidum naturaliter contento dissertationis prodromus, or Preliminary discourse to a dissertation on a solid body naturally contained within a solid.

Steno was not the first to identify fossils as being from living organisms. His contemporaries Robert Hooke and John Ray also argued that fossils were the remains of once-living organisms.

Steno wrote about some of the fundamental principles of stratigraphy:

All content from Kiddle encyclopedia articles (including the article images and facts) can be freely used under Attribution-ShareAlike license, unless stated otherwise. Cite this article:
Nicolaus Steno Facts for Kids. Kiddle Encyclopedia.