Nicolas Steno was a Danish scientist, a pioneer in anatomy and geology. He became a Catholic bishop in his later years.

by 1659 he questioned the knowledge of the natural world accepted in his time. He questioned the idea that fossils grew in the ground, and the explanations of rock formation. His investigations made him one of the founders of modern stratigraphy and modern geology. 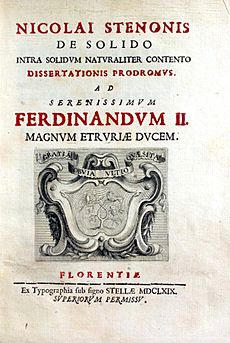 Steno, in his Dissertationis prodromus of 1669 is credited with four of the defining principles of the science of stratigraphy. Much simplified, his ideas were:

Steno's ideas still form the basis of stratigraphy and were key in the development of James Hutton's theory of infinitely repeating cycles of seabed deposition, uplifting, erosion, and submersion.

All content from Kiddle encyclopedia articles (including the article images and facts) can be freely used under Attribution-ShareAlike license, unless stated otherwise. Cite this article:
Nicolas Steno Facts for Kids. Kiddle Encyclopedia.