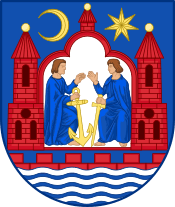 Aarhus is the second biggest city in Denmark after Copenhagen, and the biggest on Jutland, the Danish mainland. It has about 307,000 inhabitants, and the metropolitan area has more than 1,200,000.

The settlement of Aarhus was started in around the year 770 as a trading place of the Vikings, but the oldest recorded history of Aarhus is from 951. The city grew in the 16th century and again during the Industrial Revolution.

All content from Kiddle encyclopedia articles (including the article images and facts) can be freely used under Attribution-ShareAlike license, unless stated otherwise. Cite this article:
Aarhus Facts for Kids. Kiddle Encyclopedia.