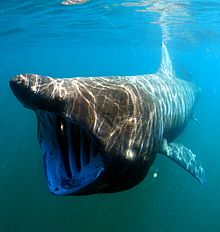 Elasmobranchs lack swim bladders, and maintain buoyancy with oil that they store in their livers. Some deep sea sharks are targeted by fisheries for this liver oil, including the school, gulper and basking sharks (pictured). All three of these species have been assessed by the IUCN as vulnerable due to overfishing. 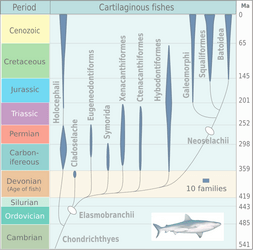 Radiation of elasmobranchs, based on Michael Benton, 2005.

From a practical point of view the life-history pattern of elasmobranchs makes this group of animals extremely susceptible to over fishing. It is no coincidence that the commercially exploited marine turtles and baleen whales, which have life-history patterns similar to the sharks, are also in trouble.

Elasmobranchii is a subclass of the Chondrichthyes or cartilaginous fish. It includes the modern sharks and the rays and skates.

Fossilised shark teeth are known from the early Devonian, around 400 million years ago. During the following Carboniferous period, the sharks underwent a period of diversification, with many new forms evolving. Many of these became extinct during the Permian, but the remaining sharks underwent a second burst of adaptive radiation during the Jurassic, around which time the skates and rays first appeared.

All content from Kiddle encyclopedia articles (including the article images and facts) can be freely used under Attribution-ShareAlike license, unless stated otherwise. Cite this article:
Elasmobranchii Facts for Kids. Kiddle Encyclopedia.