Albertosaurus (meaning "Alberta lizard") was a relative of Tyrannosaurus. Albertosaurus was smaller than T. rex and lived a few million years earlier. Albertosaurus walked on two legs and had a large head with sharp, saw-toothed teeth. It had two-fingered hands on short arms. Its long tail provided balance and quick turning. It had powerful back legs with clawed, three-toed feet.

Albertosaurus was more lightly built than Tyrannosaurus, and therefore probably a faster mover in open spaces.

Albertosaurus with a human for scale

Albertosaurus was smaller than some other tyrannosaurids, such as Tarbosaurus and Tyrannosaurus. Typical Albertosaurus adults measured up to 9 m (30 ft) long, while rare individuals of great age could grow to be over 10 metres (33 feet) long. Several independent mass estimates, obtained by different methods, suggest that an adult Albertosaurus weighed between 1.3 tonnes and 1.7 tonnes (1.9 tons).

Albertosaurus shared a similar body appearance with all other tyrannosaurids. Typically for a theropod, Albertosaurus was bipedal and balanced the heavy head and torso with a long tail. However, tyrannosaurid forelimbs were extremely small for their body size and retained only two digits. At least for the younger individuals, a high running speed is plausible. 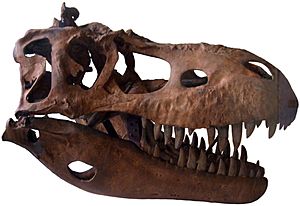 Skull cast at the Geological Museum in Copenhagen

The massive skull of Albertosaurus, which was perched on a short, S-shaped neck, was about 1 metre (3.3 feet) long in the largest adults. Wide openings in the skull (fenestrae) reduced the weight of the head while also providing space for muscle attachment and sensory organs. Its long jaws contained, both sides combined, 58 or more banana-shaped teeth; larger tyrannosaurids possessed fewer teeth, Gorgosaurus at least 62.

Unlike most theropods, Albertosaurus and other tyrannosaurids were heterodont, with teeth of different forms depending on their position in the mouth. The premaxillary teeth at the tip of the upper jaw, four per side, were much smaller than the rest, more closely packed, and D-shaped in cross section. Like with Tyrannosaurus, the maxillary (cheek) teeth of Albertosaurus were adapted in general form to resist lateral forces exerted by a struggling prey. The bite force of Albertosaurus was less formidable, however, with the maximum force, by the hind teeth, reaching 3,413 Newtons. Above the eyes were short bony crests that may have been brightly coloured in life and used in courtship to attract a mate. 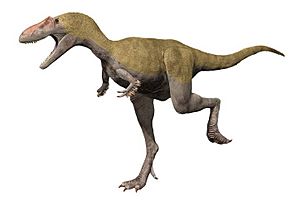 Albertosaurus was named by Henry Fairfield Osborn in a one-page note at the end of his 1905 description of Tyrannosaurus rex. The name honours Alberta, the Canadian province established the same year, in which the first remains were found.

The generic name also incorporates the Greek term sauros ("lizard"), the most common suffix in dinosaur names. The type species is Albertosaurus sarcophagus; the specific name is derived from Ancient Greek sarkophagos meaning "flesh-eating" and having the same etymology as the funeral container with which it shares its name: a combination of the Greek words sarx ("flesh") and phagein ("to eat"). 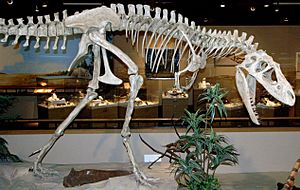 The youngest known Albertosaurus is a two-year-old discovered in the Dry Island bonebed, which would have weighed about 50 kilograms (110 lb) and measured slightly more than 2 metres (6.6 feet) in length.

The 10 metres (33 feet) specimen from the same quarry is the oldest and largest known, at 28 years of age.

During growth, through thickening the tooth changed so much that, had the association of young and adult skeletons on the Dry Island bone-bed not proven they belonged to the same taxon, the teeth of juveniles would likely have been identified by statistical analysis as those of a different species.

Most known Albertosaurus individuals were aged 14 years or more at the time of death. Juvenile animals are rarely found as fossils for several reasons, mainly preservation bias, where the smaller bones of younger animals were less likely to be preserved by fossilization than the larger bones of adults.

Young Albertosaurus are relatively large for juvenile animals, but their remains are still rare in the fossil record compared with adults. More than 30 specimens of all ages are known to science. 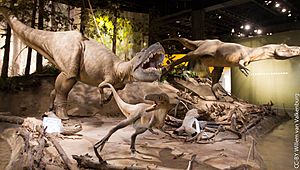 Bronze sculptures of a pack, Royal Tyrrell Museum, designed by Brian Cooley in 2007

There is plentiful evidence for sociable behaviour among herbivorous dinosaurs, including ceratopsians and hadrosaurs. However, only rarely are so many dinosaur predators found at the same site.

The leg proportions of the smaller individuals were comparable to those of ornithomimids, which were probably among the fastest dinosaurs. Younger Albertosaurus were probably equally fleet-footed, or at least faster than their prey. It's hypothesized that the younger members of the pack may have been responsible for driving their prey towards the adults, who were larger and more powerful, but also slower.

Juveniles may also have had different lifestyles than adults, filling predator niches between the enormous adults and the smaller contemporaneous theropods, the largest of which were two orders of magnitude smaller than adult Albertosaurus in mass.

A similar situation is observed in modern Komodo dragons, with hatchlings beginning life as small insectivores before growing to become the dominant predators on their islands. 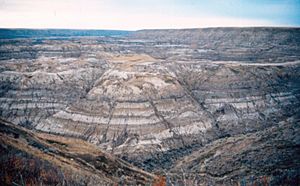 All identifiable fossils of Albertosaurus sarcophagus are known from the upper Horseshoe Canyon Formation in Alberta. These younger units of this geologic formation date to the early Maastrichtian stage of the Late Cretaceous Period, 70 to 68 Ma (million years ago). Immediately below this formation is the Bearpaw Shale, a marine formation representing a section of the Western Interior Seaway.

The seaway was receding as the climate cooled and sea levels subsided towards the end of the Cretaceous, exposing land that had previously been underwater.

The fauna of the Horseshoe Canyon Formation is well-known, as vertebrate fossils, including those of dinosaurs, are quite common. Sharks, rays, sturgeons, bowfins, gars and the gar-like Aspidorhynchus made up the fish fauna. 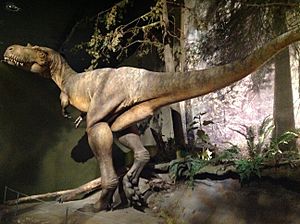 Mammals included multituberculates and the marsupial Didelphodon. The saltwater plesiosaur Leurospondylus has been found in marine sediments in the Horseshoe Canyon, while freshwater environments were populated by turtles, Champsosaurus, and crocodilians like Leidyosuchus and Stangerochampsa. Dinosaurs dominate the fauna, especially hadrosaurs, which make up half of all dinosaurs known, including the genera Edmontosaurus, Saurolophus and Hypacrosaurus. Ceratopsians and ornithomimids were also very common, together making up another third of the known fauna.

Along with much rarer ankylosaurians and pachycephalosaurs, all of these animals would have been prey for a diverse array of carnivorous theropods, including troodontids, dromaeosaurids, and caenagnathids. Intermingled with the Albertosaurus remains of the Dry Island bonebed, the bones of the small theropod Albertonykus were found. Adult Albertosaurus were the apex predators in this environment, with intermediate niches possibly filled by juvenile albertosaurs.

All content from Kiddle encyclopedia articles (including the article images and facts) can be freely used under Attribution-ShareAlike license, unless stated otherwise. Cite this article:
Albertosaurus Facts for Kids. Kiddle Encyclopedia.