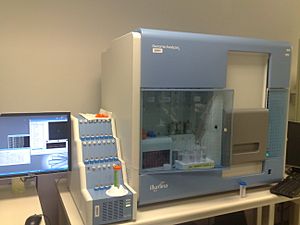 Genomics is the part of genetics which studies the genomes of organisms. This includes the entire DNA sequence of organisms and fine-scale genetic mapping. The field also includes studies of genes working together. Examples are heterosis, epistasis, pleiotropy and other interactions between loci and alleles within the genome.

Genomics applies recombinant DNA, DNA sequencing methods, and bioinformatics to sequence, assemble, and analyze the function and structure of genomes. This is the complete set of DNA within a single cell of an organism). In contrast, the investigation of the roles and functions of single genes is a primary focus of molecular biology or genetics and is a common topic of modern medical and biological research. Research of single genes unless it involves the entire genome.

"The term "genomics" encompasses a broader scope of scientific inquiry associated technologies than when genomics was initially considered. A genome is the sum total of all an individual organism's genes. Thus, genomics is the study of all the genes of a cell, or tissue, at the DNA (genotype), mRNA (transcriptome), or protein (proteome) levels".

All content from Kiddle encyclopedia articles (including the article images and facts) can be freely used under Attribution-ShareAlike license, unless stated otherwise. Cite this article:
Genomics Facts for Kids. Kiddle Encyclopedia.