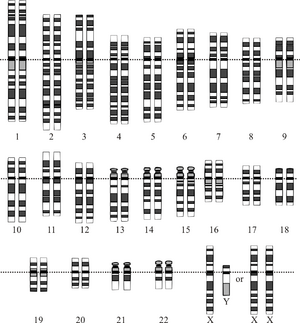 Graphical representation of the idealized human karyotype, showing the organization of the genome into chromosomes. This drawing shows both the female (XX) and male (XY) versions of the 23rd chromosome pair.

The human genome contains just over 20,000 protein-coding genes, far fewer than had been expected. In fact, only about 1.5% of the genome codes for proteins, while the rest consists of non-coding RNA genes, regulatory sequences, and introns.

However, a single gene can produce a variety of proteins by means of RNA splicing. One particular Drosophila gene (DSCAM) can be alternatively spliced into 38,000 different mRNAs. Each mRNA codes for a different peptide chain. Therefore the number of proteins produced is far above the number of coding genes.

With RNA splicing and post-RNA translation changes, the total number of unique human proteins may be in the low millions.

The idea that most DNA is useless 'junk' is wrong. At least 80% of the genome has definite functions.

All content from Kiddle encyclopedia articles (including the article images and facts) can be freely used under Attribution-ShareAlike license, unless stated otherwise. Cite this article:
Human genome Facts for Kids. Kiddle Encyclopedia.