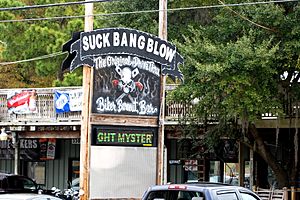 Murrells Inlet is an unincorporated area and census-designated place in Georgetown County, South Carolina, United States. The population was 7,547 at the 2010 census. It is about 13 miles south of Myrtle Beach, South Carolina and 21 miles north of Georgetown, the county seat.

The community was once primarily a fishing village. It has developed in modern times, along with the rest of the Grand Strand, as a tourist and retirement location. It is known for the Murrells Inlet Marshwalk, a 1⁄2-mile-long (0.8 km) boardwalk overlooking a salt marsh. Many restaurants have been developed along the boardwalk.

The land around Murrells Inlet has a record of settlement that goes back thousands of years, before written history, but evident in the shell mounds and archeological findings from the Atlantic Ocean to the Waccamaw River. The early inhabitants included the Waccamaw people, who took advantage of the natural resources provided by the creeks and rivers. Wachesaw is loosely translated as "Place of Great Weeping", in reference to the burial grounds. Indian burial mounds have been found along the high bluffs at Wachesaw that contained European beads, urns and other artifacts.

The recorded history of the area goes back to the days of English settlements and the land grants of the Lords Proprietors, when large portions of the Waccamaw Neck were divided into baronies that stretched from the Atlantic Ocean to the Waccamaw River. The baronies were typically tens of thousands of acres that were subdivided into long narrow plantations that ranged from 500 to 1,500 acres (200 to 610 ha). The plantations of Murrells Inlet included The Oaks, Brookgreen, Springfield, Laurel Hill, Richmond Hill, and Wachesaw (from south to north). The first land grants were given to Robert Daniell in 1711, who in turn sold to several other speculators, with the first planters arriving in the 1730s to begin building settlements. The most notable (for historic purposes) was Captain John Murrell, who bought 2,340 acres (950 ha) which eventually became Wachesaw and Richmond Hill plantations, and built a house on the bluff there around 1733. He was a subsistence farmer, and raised indigo as the primary cash crop. He died in 1771 and left his land to his son Daniel and his two daughters, after which it became the two separate plantations. Wachesaw Plantation was eventually purchased by Allard Belin around 1800, while Richmond Hill passed through Murrell descendants until it was sold to an Allston (most likely John Hayes Allston, who pioneered rice planting techniques with clay).

Adjacent plantations were owned by a host of famous planters, including Plowden Weston, his grandson Plowden C. J. Weston, William Allston, Benjamin Allston, Dr. Henry Flagg, Allard Flagg, Joshua Ward, Allard Belin and their descendants. These plantations prospered during the establishment of the rice culture of the 1700s and 1800s. These men were actively involved with supporting the American cause during the Revolutionary War, including William Allston who was a captain under and brother-in-law of Francis Marion (who had family ties through marriage to the Allston family). The Waccamaw Neck planters were represented in the state Senate and House, as well as the Governor's and Lieutenant Governor's office during the 1800s. The rice planters were also active in the establishment of social, educational, and religious organizations, including the Planters Club, the Winyah Indigo Society, the Hot and Hot Fish Club, the All Saints Academy, the Waccamaw Methodist Mission, and All Saints Waccamaw. The names of the families are shown on the various historic maps that date back as far as 1783 – the listing of the Murrell family on the first maps is the most credible explanation of the origin of the name "Murrells Inlet". It has been alternately shown as "Morrall's Inlet" and "Murrays Inlet" on later maps.

The rice plantation era came to an end after the Civil War with the emancipation of the slaves (rice cultivation was labor-intensive) and a series of hurricanes that climaxed with the 1893 Hurricane (also known as the Flagg flood, where the Atlantic Ocean was reported to meet the Waccamaw River). The loss of the slave labor resulted in the decline of the fields, dikes, and water control structures required for rice cultivation, since planters had to rely on freedmen to work the fields. Several powerful hurricanes following the Civil War and up to the 1893 hurricane resulted in uprooted trees and flood-damaged dikes in the rice fields and ultimately ended the production of rice on the Waccamaw Neck. The 1893 hurricane became known as the Flagg Flood, because the Flagg families that lived in houses on Magnolia Beach (Dr. Arthur, his wife Georgeanne, his son Arthur Jr., and his wife and six children) were swept away in the storm surge. Dr. Ward Flagg (one of three sons) survived the storm and retired to the miller's cottage in Brookgreen and reportedly never visited the ocean again.

After Dr. Allard Flagg's death in 1901, his daughter sold Wachesaw and the Hermitage to Samuel Sidney Fraser, a real estate speculator, who bought and sold interests in several old plantations after the Civil War. Fraser held onto the plantation briefly before selling to Robert Ernest Beaty in 1905. Clarke A. Willcox of Marion purchased Wachesaw and the Hermitage in 1910 for $10,000 to use as a summer retreat. The Willcox family retained the Hermitage, but sold Wachesaw in 1930 to William A. Kimbel, who also bought Richmond Hill with the purpose of developing a large hunting estate. With his purchase of both properties, Kimbel had restored the boundaries of John Murrell's original plantation.

In 1920, Dr. Julius A. Mood of Sumter and a group of sportsmen bought Brookgreen, Springfield, Laurel Hill, and The Oaks to use as a hunting preserve. His daughter, Julia Mood Peterkin, made several visits to Brookgreen and used the area as the setting for some of her novels. She won the Pulitzer Prize for Fiction for Scarlet Sister Mary in 1928. Club members enjoyed their hunting paradise for ten years, as a succession of owners conserved the property before selling out to yet another wealthy outsider seeking a rural estate in the South where land was cheap. After numerous owners, railroad magnate Archer Milton Huntington purchased Brookgreen in 1930. At first, he and his wife, Anna Hyatt Huntington, intended Brookgreen as a winter resort. Eventually, they decided to use the plantation as an outdoor gallery for Mrs. Huntington's award-winning sculptures. The Huntingtons constructed Atalaya, a Spanish-style fort, on the beach to use for her studio and living quarters at what is now Huntington Beach State Park, abandoning the plantation houses. Brookgreen is open year-round and offers tremendous opportunities for investigating the old rice culture, modern art, and beautiful gardens, for which Brookgreen is famous today.

The years from Reconstruction until World War I saw an increase in the number of settlers who moved to Murrells Inlet to enjoy the natural resources provided. The family names listed in the 1900–1930 census records reflect the growth and are still found in Murrells Inlet today. The families that moved into this area were from communities like Marion, Conway, Southport, and other nearby counties.

The transportation corridors up to the 1900s were primarily the Waccamaw River and the Atlantic Ocean for boats, and the Kings Road (used during George Washington's visit) and the River Road (along the Waccamaw River near the plantation houses) for horse and wagons. These dirt paths were crude rough paths that bore no resemblance to today's modern highways. Highway 17 was paved around 1933 as part of a federal effort to provide paved roads across the United States. Early shipping routes relied on the deepwater access provided by the Waccamaw River to move vast quantities of materials and goods. The Comanche was an early steamship that called on Wachesaw Landing to deliver passengers and mail to Murrells Inlet.

Murrells Inlet landmarks that are registered and listed on the National Register of Historic Places:

All content from Kiddle encyclopedia articles (including the article images and facts) can be freely used under Attribution-ShareAlike license, unless stated otherwise. Cite this article:
Murrells Inlet, South Carolina Facts for Kids. Kiddle Encyclopedia.