Sunset Beach is a seaside town in Brunswick County, North Carolina, United States. The population was 3,572 at the 2010 census, up from 1,824 at the 2000 census. It is part of the Myrtle Beach metropolitan area.

The seaside town of Sunset Beach had its start in 1955 when the land it occupies was bought by a property developer. Development began in earnest with the completion of a bridge connecting the beach island to the mainland in 1958. Sunset Beach was incorporated as a town in 1963.

There were 909 households out of which 7.6% had children under the age of 18 living with them, 70.0% were married couples living together, 3.3% had a female householder with no husband present, and 25.4% were non-families. 21.3% of all households were made up of individuals and 9.2% had someone living alone who was 65 years of age or older. The average household size was 2.01 and the average family size was 2.28. 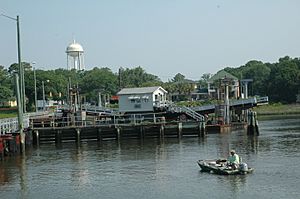 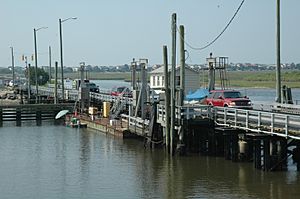 Since most of Sunset Beach and the adjoining Bird Island coastal reserve encompass a barrier island, the only way to get there from the mainland was by crossing a pontoon bridge (swing bridge) straddling the Intracoastal Waterway and adjacent marshland. It was a wooden structure that could only hold one lane of traffic at any given time, and was the only one of its kind still in use along the East Coast until 2010. During the day in the summer, traffic would be stopped every hour, on the hour, and the bridge would open to boat traffic on the waterway for 10 minutes. At 10 minutes after the hour, every hour, the bridge would reopen for vehicular traffic again for 50 minutes. During the off-season, the bridge only opened at the request of boat traffic. While this caused headaches for those trying to get on or off the island, many locals said the bridge did, however, give the town a more relaxed feel. Historically, this had been in stark contrast to the rapid growth affecting other beach communities along the Grand Strand.

In February 2008 the NCDOT started construction to replace the old bridge with a modern, 65-foot-high (20 m) arc bridge (non-draw, non-swing). The bridge opened November 11, 2010. The old Sunset Beach pontoon swing bridge was saved by the Old Bridge Preservation Society which plans to create a museum celebrating the old bridge and the town's history. The new bridge eliminates the need for a bridge keeper and provides for a continual flow of vehicle traffic on and off the island, and water traffic on the Intracoastal Waterway.

All content from Kiddle encyclopedia articles (including the article images and facts) can be freely used under Attribution-ShareAlike license, unless stated otherwise. Cite this article:
Sunset Beach, North Carolina Facts for Kids. Kiddle Encyclopedia.