Ocean Isle Beach which is also called Ocean Isle is a small seaside town located in Brunswick County, North Carolina, United States. The population was 550 at the 2010 census. It is part of the Myrtle Beach metropolitan area.

Located at the southern end of North Carolina's Atlantic Ocean coastline, with access to the Atlantic Intracoastal Waterway, Ocean Isle Beach is a tourist attraction with many beach houses, as well as various tourist attractions. 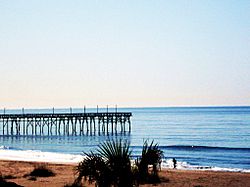 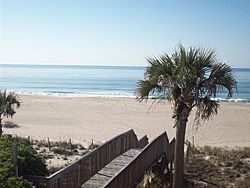 View of the Atlantic Ocean from Ocean Isle Beach

Known as the "Gem of the Brunswick Islands",. Ingram Planetarium offers an 85-seat domed theater with learning experiences on astronomy, energy, navigation, and space exploration. The Museum of Coastal Carolina offers dioramas on coastal life, a touch tank, and a science hall.

Ocean Isle Beach was incorporated as a town in 1959.

The town was the scene of a massive house fire on October 28, 2007, which claimed the lives of seven students staying in the house at the time. 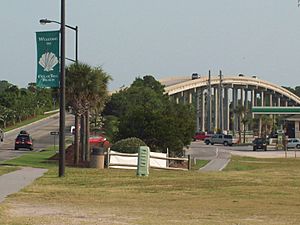 There were 209 households out of which 11.5% had children under the age of 18 living with them, 62.7% were married couples living together, 2.4% had a female householder with no husband present, and 32.5% were non-families. 25.4% of all households were made up of individuals and 5.3% had someone living alone who was 65 years of age or older. The average household size was 2.04 and the average family size was 2.40.

Brunswick County will soon break ground on a new 58-acre (23 ha) recreational park on the mainland. The Town of Ocean Isle Beach donated the property and the county has set aside $3 million for the project. When completed, the new park will offer a variety of amenities, such as an amphitheater, festival grounds, ball parks, lighted tennis courts, and biking trails. This recreational park will be located on Old Georgetown Road abutting the Ocean Ridge Plantation community and is part of a $500,000 federal grant for parks throughout the county. Other projects scheduled is the Shallotte Blvd Recreation Area, which is a joint project between Ocean Isle Beach Land Conservancy and the Town of Ocean Isle Beach. The park will be at Shallotte Blvd and the ferry landing at the East end of the island. The recreation area will have a gazebo, picnic tables, a fishing pier, and a walkway with steps to the sand.

The American Shore and Beach Preservation Association named Ocean Isle Beach the winner of its 2008 Best Restored Beach Award. Ocean Isle Beach's quest for a federal beach restoration program began after Hurricane Hugo devastated the area in 1989. The town lobbied members of Congress for federal funding and opened a capital reserve savings account to provide the local share of funding necessary for restoration. Coastal engineers began the project in 2001 and provided high-quality sand for the beach and created a deeper channel for boaters. Judging for the award was based on three criteria: the economic and ecological benefits the beach brings to its community; the short and long term success of the restoration project; and the challenges each community overcame during the course of the project.

All content from Kiddle encyclopedia articles (including the article images and facts) can be freely used under Attribution-ShareAlike license, unless stated otherwise. Cite this article:
Ocean Isle Beach, North Carolina Facts for Kids. Kiddle Encyclopedia.