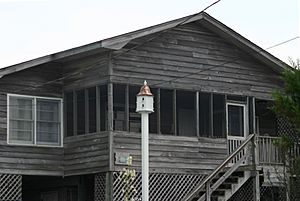 Pawleys Island is a town in Georgetown County, South Carolina, United States, and the Atlantic coast barrier island on which the town is located.

Pawleys Island's population was 103 at the 2010 census, down from 138 in 2000. The post office address also includes an unincorporated area on the mainland adjacent to the island, which includes a commercial district along the Ocean Highway (US Route 17) and a residential area between the highway and the Waccamaw River. The island is on the southern end of The Grand Strand and is one of the oldest resort areas of the US East Coast. The town of Pawleys Island, though, is only on the island. The island lies off the Waccamaw Neck, a long, narrow peninsula between the ocean and the river, and is connected to the mainland by two bridges, the North Causeway and the South Causeway.

The earliest known inhabitants of the Pawleys Island area were Waccamaw and Winyah Native Americans. They called the area "Chiquola" or "Chicora", meaning "the land".

The Waccamaw tribe got its name from the nearby Waccamaw river. The river is referred to by the natives as "coming and going" which influenced their name. These tribes lived off of the land and the sea. They embellished many amenities that it came with, including Oysters. The ocean winds and the abundant source of wildlife made it ideal for these tribes. Even today there is some evidence left such as "middens", these are huge piles of shells from the oysters that were harvested by these tribes. There are still a few Waccamaw natives left unlike their neighboring tribe, the Winyahs who are completely extinct. The Winyahs inherit their name from the Winyah Bay, an area known for its surplus of wildlife much like Pawleys Island. In the early 1700s the colonists from Europe began to set up markets and shops to barter and sell items with these tribes. This was short lived; soon fights began to break out and many problems arose causing complete destruction of these tribes.

The island became a refuge from summer mosquitoes because of common windy conditions. The town's namesake George Pawley owned the island during the colonial era, and sold portions of it to other planters seeking to escape malaria.

In 1791, two years after he was elected president, George Washington toured the Grand Strand, travelling The King's Highway in the unincorporated portion off Pawleys Island to visit the Alstons, wealthy planters who owned several plantations in the area. Rice fields occupied the Waccamaw River side of the neck.

With Hurricane Hugo in 1989, some island cottages were swept away and have since been replaced. The island bans commercial or industrial buildings on the island with the exception of a '70s condominium complex and a few grandfathered inns, including the SeaView Inn and the PCJ Weston House, which is now the Pelican Inn. 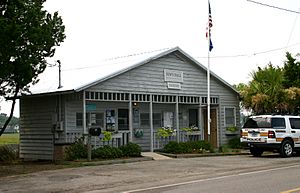 The town government was incorporated in 1985. The water temperature is comfortable from May to October, and there is abundant fishing, crabbing, shrimping, and birdwatching most months of the year.

There were 81 households, out of which 9.9% had children under the age of 18 living with them, 50.6% were married couples living together, 1.2% had a female householder with no husband present, and 46.9% were non-families. 45.7% of all households were made up of individuals, and 17.3% had someone living alone who was 65 years of age or older. The average household size was 1.70 and the average family size was 2.30.

The Gray Man is a famous purported ghost local to Pawleys Island and is said to have walked the coastline for nearly 200 years. His presence is said to warn of hurricanes and other dangers.

The most common origin story of the Gray Man is that in 1822 a young woman was staying on the island with her family when she received word that her fiancé was going to join her there. Delighted with the news, she prepared all of his favorite dishes in anticipation of his arrival. However as her fiancé was traveling to the house he challenged his servants to a race on their horses. As they raced he saw a shortcut through a marsh and decided to take it. The horse stumbled in the marsh, throwing him off the horse, and despite his servants' efforts to free him he sank into the mud.

The news of her fiancé's death nearly drove the girl mad, and she had distressing waking and night-dream visions of him. Her family took her to Charleston to see a doctor; within hours of their leaving a hurricane hit the coast and almost all of the Pawleys Island inhabitants died, but the family's house was untouched.

Pawleys Island has a public library, a branch of the Georgetown County Library.

All content from Kiddle encyclopedia articles (including the article images and facts) can be freely used under Attribution-ShareAlike license, unless stated otherwise. Cite this article:
Pawleys Island, South Carolina Facts for Kids. Kiddle Encyclopedia.