Caswell Beach is a small seaside town located on the Atlantic Ocean at the mouth of the Cape Fear River in Southeastern North Carolina. Occupying the eastern part of Oak Island in Brunswick County, its population was listed at 398 in the 2010 census. Prominent features include the Civil War era Fort Caswell, the Oak Island Lighthouse co-located with the Oak Island Coast Guard Station, and the Oak Island Golf Club, the sole business in town and one of the few eighteen-hole courses located on a North Carolina barrier island. Along with the Town of Oak Island which occupies the central and west parts of the island, Caswell Beach is considered to be in the Myrtle Beach metropolitan area.

Contiguous to Fort Caswell which dates from 1825, Caswell Beach was incorporated as a town in 1975; both were named for Richard Caswell, 1st & 5th Governor of North Carolina. Since 1949, Fort Caswell has housed the North Carolina Baptist Assembly, a religious retreat and conference center and in 2013, the fort was designated a National Historic District. Thirteen of the 18 holes of the Oak Island Golf Club, which was established in 1962, are located within town boundaries. 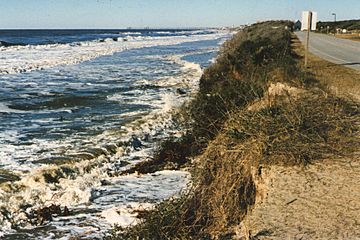 Beginning in the late 1990s, the town set in motion an intensive beach restoration and preservation effort which resulted in its receiving a national award in 2002 for Best Restored Beach. Two years later, after extensive negotiations with the National Park Service, the town acquired the Oak Island Lighthouse. 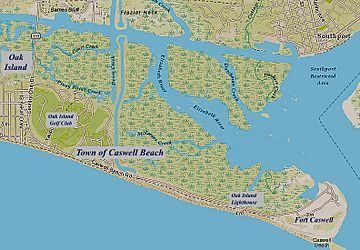 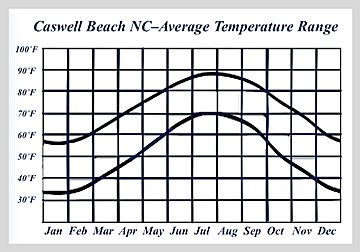 Summers in Caswell Beach are hot and humid with an average temperature of 85˚, although the beach front is cooled much of the time by sea breezes (the prevailing winds are from the southwest). Winters are moderate with an average temperature in the 50's, albeit with brief cold periods. Rain occurs throughout the year with average annual rainfall approximately 57", 45% of this falling between June and September.

Tropical storms are a continuing source of concern, e.g., in Oct. 1954 Hurricane Hazel washed away almost all the houses on Oak Island. A threat in late summer/early fall, the 1996-1999 period was intense with four major hurricanes (Bertha, Fran, Bonnie, and Floyd) making landfall and having significant effects on the area, while in the fall of 2005, Tropical Storm Ophelia and Hurricane Tammy combined to cause flooding in low-lying areas. In October 2016, the eye of Hurricane Matthew passed almost directly over the town inflicting in some areas extensive damage to the dune system.

The 398 people identified in the 2010 census reside in 187 permanent households (overall there were 685 housing units in Caswell Beach at the time of the census). This population is essentially all white, fairly elderly (median age 63) with more women (215) than men (183). Median household income is $74,219. None of the population or families were below the poverty line. While the number of full-time residents is fairly small, in the summer peak population reaches 2000, mostly family vacationers using rental properties. 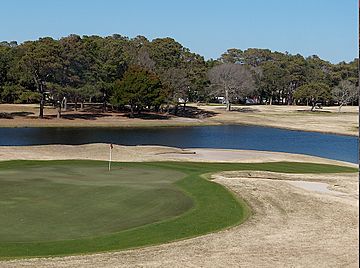 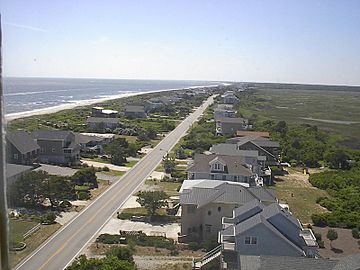 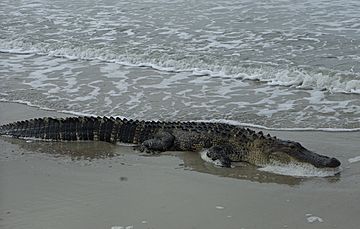 Beach. In way of combating erosion rates ranging from 2-5’ per year, the town’s three mile long, south facing beach has been renourished twice in the past 15 years, with expectations that additional sand will be added in the 2017/2018 time frame. The beach also serves as a sea turtle nesting area, which has spurred a vigorous dune protection and restoration program featuring sea oats/beach grass plantings. This program not only benefits turtle nesting but protects the town against hurricane storm surge damage. As for public access to the beach, the town maintains a free parking lot and 12 walkways spread out along the strand, most of which have wheelchair ramps.

Golf Course. The 18 hole, par 72 course at the Oak Island Golf Club (OIGC) is open to the public as are its bar and restaurant (Duffer's Pub and Grill). The 6,720 yard course layout has 37 bunkers and water in play on nine different holes along with five sets of tees (back tees are course rated at 73.3 with a slope of 133). Designed by George Cobb, famous as the co-designer of Augusta National's par 3 course, it features ultradwarf TifEagle greens and Bermuda tees/fairways/rough. Live Oaks and Yaupon Holly trees border most every fairway, and with its well placed bunkers, water hazards and the wind, it provides an enjoyable and challenging golfing experience. A full practice facility is available to the public which includes a putting green, sand traps and a driving range.

Lighthouse. The Oak Island Lighthouse grounds are open to the public year round for viewing and picture taking, with limited 30 minute parking provided at the base of the tower from sunrise until sunset. During the summer months, two types of interior tours are available (the one to the top is by appointment only). The light is maintained by personnel housed at the adjacent Coast Guard Station, while the structure itself is cared for and managed by a citizens group, Friends of the Oak Island Lighthouse (FOIL). A major exterior rehabilitation project was completed in 2016, notable in that it was funded entirely by contributions.

Fort Caswell. Fort Caswell is accessible by the public to a limited extent per the conditions set forth by the Director, North Carolina Baptist Assembly. Now utilized as a religious retreat and conference center, during the Civil War it defended Confederate positions on the North Carolina coast. Subsequently, it served as an army training ground in World War I and as a patrol communications base in World War II. Thus its forts and batteries provide opportunities to view and connect with a significant part of US history. Also a part of the Fort Caswell Historic District but located further west in the Caswell Dunes area are rifle pits used by WW I soldiers for target practice.

Natural Attractions. Given its small population and remote location, much of the town’s charm rests with its salt and fresh water marshes and a maritime forest, all of which support a wide range of plant and animal life. Alligators, turtles, foxes, deer, raccoons, beavers, eagles, brown pelicans, great white and blue herons, and ibis abound, while an occasional bear has been known to swim across the Intracoastal Waterway to visit the town. As for plant diversity, Live Oak, Longleaf Pine and Yaupon Holly predominate in the forest, while Azaleas, American Beautyberry and Sweet Bay Magnolia thrive both in natural and landscaped areas.

Southport. Located just across the ICW is the quaint town of Southport. Founded as Smithville in 1792, it is home to the NC Fourth of July Festival and has been the location for many movies, one of the more notable being Safe Haven (2013). The part of town known as “Old Southport” has many historic houses and buildings, e.g. Fort Johnston, and situated on its waterfront is the North Carolina Maritime Museum at Southport and year-round ferry service that provides scenic trips across the Cape Fear River to the NC Aquarium and Civil War battleground site at Fort Fisher.

Oak Island. While more amenities than attractions, the Town of Oak Island immediately to the west has a contract post office , a branch of the county library, a Food Lion, an ABC Liquor Store, two fishing piers (one of which is closed awaiting reconstruction) a few gas stations, numerous small professional offices/retail stores, and a large number of restaurants.

All content from Kiddle encyclopedia articles (including the article images and facts) can be freely used under Attribution-ShareAlike license, unless stated otherwise. Cite this article:
Caswell Beach, North Carolina Facts for Kids. Kiddle Encyclopedia.