Southport is a city in Brunswick County, North Carolina, United States, near the mouth of the Cape Fear River. Its population was 3,828 as of the 2018 census. The mayor is Joseph P. Hatem.

Southport has been a popular filming location for television and movies, including film adaptations of the works of novelist Nicholas Sparks. The town can be seen in the television series Dawson's Creek, Under the Dome, Revenge, and Matlock, and in numerous movies, including I Know What You Did Last Summer, Summer Catch, Domestic Disturbance, Crimes of the Heart, Nights in Rodanthe, A Walk to Remember and Safe Haven.

Southport is the location of the North Carolina Fourth of July Festival, which attracts 40,000 to 50,000 visitors annually.

The Southport area was explored as early as the 1500s by Spanish explorers. During the 18th century, British settlements along the Carolina coast lacked fortifications to protect against pirates and privateers, and numerous Spanish attackers exploited this weakness. In response to these attacks, Governor Gabriel Johnston in 1744 appointed a committee to select the best location to construct a fort for the defense of the Cape Fear River region. It was determined that the fort should be constructed at a site at the mouth of the Cape Fear River. During the same year, France declared war against Britain, later known as King George's War, increasing the fort's need. Further, increasingly bold Spanish privateer raids led the North Carolina General Assembly to authorize the construction of "Johnston's Fort" in April 1745, which would come to be known as Fort Johnston. The governor of South Carolina agreed to lend ten small cannons for the fort, and the legislature, in spring 1748, appropriated 2,000 pounds for construction costs, and construction finally began. Southport developed around Fort Johnston.

Southport was founded as the town of Smithville in 1792. Joshua Potts had requested the formation of a town adjacent to Fort Johnston, and the North Carolina General Assembly formed a commission of five men to administer its founding. The town was named after Benjamin Smith, a colonel in the Continental Army during the Revolutionary War and later governor of North Carolina. Smithville grew as a fishing village and through supporting military activity. Smithville was the county seat of Brunswick County from 1808 to 1887. In an effort to promote the town as a major shipping port, Smithville was renamed Southport in 1887. Smithville Township, in which Southport lies, and other local landmarks, such as the cemetery, retain the Smithville name.

An award-winning weekly newspaper, The State Port Pilot, is located in the city and serves as the source of local information for its residents. 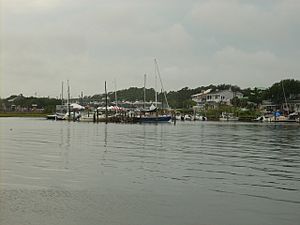 Deep Point Marina located near the Southport-Fort Fisher Ferry is the new hub for the Bald Head Island Ferry.

The marina made statewide news when it was announced that the State Ports Authority would put it up for sale, causing an uproar among the town's residents, who were concerned that development was spoiling the town's "fishing village charm". Former North Carolina Governor Mike Easley, himself a resident of Southport, quickly reversed the decision and declared that the State Ports Authority would continue to own the marina.

The city's government pursued a purchase of the marina to preserve it from a future sale to private developers, but the state retained ownership of the marina and approved a lease for the facility to a new ownership group, Southport Marina, Inc., which has invested in significant repairs and upgrades to the facility.

Built in the 1970s on 1,200 acres (490 ha) at 20 feet (6.1 m) above sea level and about 5 miles (8.0 km) from the Atlantic Ocean near Southport, Duke Energy Carolinas operates the 1,870-megawatt Brunswick Nuclear Power Plant which has two nuclear reactors. This plant is the same generation and design as the Fukushima Daiichi plant in Japan. Following the Fukushima Daiichi nuclear meltdown, temporary flood prevention updates, called "cliff edge barriers" to make doors at the facility water tight, were installed at Brunswick to prevent flooding from Hurricane Florence from causing a disaster similar to Fukushima Daiichi. These temporary barriers are designed to stop flooding from a storm surge of up to 26 feet (7.9 m). On Thursday, September 13, 2018, before Hurricane Florence made landfall at Wrightsville Beach, Duke Energy shut down the first reactor in the early morning and the second reactor in the afternoon about two hours before tropical storm-force winds at the plant.

All content from Kiddle encyclopedia articles (including the article images and facts) can be freely used under Attribution-ShareAlike license, unless stated otherwise. Cite this article:
Southport, North Carolina Facts for Kids. Kiddle Encyclopedia.