North Carolina Aquariums is a system of three public aquariums located in Kure Beach, Roanoke Island and Pine Knoll Shores. All are operated by the Aquariums Division of the North Carolina Department of Natural and Cultural Resources since 1976 and are accredited by the Association of Zoos and Aquariums. All three aquariums feature dive shows, live animal encounters, and feeding programs.

The focus of the North Carolina Aquarium at Fort Fisher, in Kure Beach, is to educate visitors about the waters of the Cape Fear region. The aquarium was recently named among the Best Aquariums in the United States by the Travel Channel and is one of the Top Ten Attractions in North Carolina. The Cape Fear Conservatory, the visitor's first stop in the aquarium, features freshwater life. In this large, tree-filled atrium, streams, ponds and swamps are home to frogs, snakes, bass, catfish, and perch. Box turtles hide among the Conservatory's groundcover. American alligators native to North Carolina occupy one of the larger exhibits in the Conservatory. An albino alligator exhibit opened in 2009. In 2006, the aquarium opened an exhibit featuring the venomous snakes of the region, including several species of rattlesnake, copperheads, and cottonmouths. 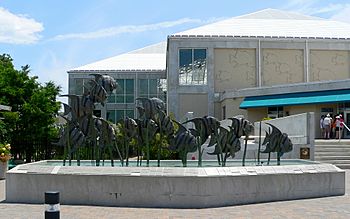 The Spadefish Sculpture outside the main entrance of the North Carolina Aquarium at Fort Fisher.

The Exotic Aquatics Display features animals native to Indo-Pacific and other ocean regions. These displays include spiny lobsters, the red lionfish (Pterois volitans), and a North Carolina native, the spotted scorpionfish. They are both known for their inconspicuous, venomous spines. Lionfish are native to the Indian and Pacific Oceans, but in 2000 were confirmed as having established themselves in North Carolina. Australian spotted jellies, recently invasive in U.S. coastal waters, are among the gallery's newer exhibits. In June 2012, the aquarium opened the Bamboo Shark Touch Pool exhibit which allows visitors to touch live bamboo sharks. Bamboo sharks are considered harmless to humans and the aquarium hopes to educate visitors about sharks through interaction.

Most of the larger creatures inhabit the aquarium's centerpiece exhibit, the 306,000-US-gallon (1,160,000 l; 255,000 imp gal) Living Shipwreck. Along with hundreds of schooling fishes and other animals, they create a swirl of constant motion around a replica of U-352, a German submarine that lost a World War II battle with a Coast Guard cutter off the North Carolina coast. The aquarium's three river otters also have lived up to expectations of stardom. With the help of the public, two were named Neuse and Pungo after North Carolina rivers. Neuse and Pungo came to the aquarium when they were about a year old in 2006. Eno, the third otter, was brought to the aquarium at four weeks old in April 2008, after his mother was killed by a car near White Lake. Aquarists bottle-fed him until he could trade formula for fish and other solid food, and helped him learn to swim. Now he's strong, healthy, energetic and playful. Wide viewing windows bring their playful antics and underwater agility to child-eye-level, and the lively pair enchants people of all ages. 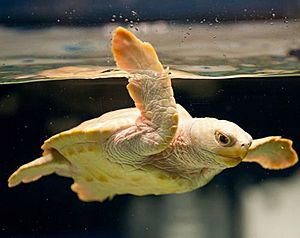 On August 11, 2010, a rare white sea turtle was brought to the aquarium for care. Nimbus, as the turtle was named, was weak and smaller than the average loggerhead hatchling. It turned up when a hatched-out Pine Knoll Shores nest was excavated for baby turtles left behind. Hampered by a cleft palate, it had to be coaxed into eating. It lagged behind in growth, also, but appears to be catching up with other hatchlings of the same age. Nimbus is on exhibit in the Tidal Waters Gallery. The turtle is something of a rock star at the aquarium — especially with visiting school groups.

Throughout the year the North Carolina Aquarium offers free daily programs, including: live animal programs, animal feeding presentations, a "Live Dive!" show, puppet shows, quiz games and hands-on activities. A number of special activities are available for a small fee. In the summer, beginning June 1, the North Carolina Aquarium offers snorkeling, surfing classes, night treks to search for nesting sea turtles, on board collection and river cruises, kayaking and canoeing excursions, and fishing courses. Kayaking, canoeing and fishing programs continue into the fall, when seafood cooking classes are also offered. Behind-the-scenes tours, Dinner with the Critters, and Breakfast with the Rays are offered year round.

The North Carolina Aquarium on Roanoke Island is a 68,000-square-foot (6,300 m2) facility located on the Outer Banks. Aquarium visitors are able to explore some of the state's ecosystems and learn about the animals inhabiting them, beginning with Coastal Freshwaters and ending at the Open Ocean exhibit, also called the Graveyard of the Atlantic. This 285,000 gallon, exhibit houses the largest collection of sharks in the state, along with many species of game fishes. It also features a replica of the USS Monitor, a Civil War ironclad which sank off the coast of Cape Hatteras in late December, 1862. Alligators, various species of turtles, fish, and the ever-popular North American river otters are featured in Wetlands on the Edge. One alligator is leucistic, meaning he has reduced pigmentation in his skin. He is mostly white with patches of brown and blue eyes, making Bleu a fitting name. The Sea Turtle Assistance and Rehabilitation (STAR) Center opened to the public on June 27, 2014. The STAR Center is a 3,000 square-foot expansion, allowing staff and volunteers to maintain an excellent level of care for sick and ailing sea turtles. Eight tanks along with an examination room, food prep areas, and storage greatly improved upon the original rehab center. Visitors have the opportunity to see the turtle patients through viewing windows on the tanks and hear their recovery stories from the people who help them every day. When they are fully rehabilitated, the sea turtles are released back into the wild, some with satellite transmitters to track their movements. After learning about sea turtles at the center, diagnose and care for a replica of an injured sea turtle in the interactive and hands-on exhibit Operation: Sea Turtle Rescue.

Touch a stingray, a white-spotted bamboo shark, or a sea star in the Close Encounters exhibit. Free programs are offered every day, and, for an additional fee, guests can see and learn even more about our animals during a behind-the-scenes tour or participate in a camp or other special activity. Stroll along the educational soundside pier, a popular location for wedding ceremonies. The aquarium is equipped to host receptions and other special events, even underwater weddings. Open-water certified divers can participate in the aquarium Shark Dive program and get up-close and personal with sharks in the Graveyard of the Atlantic exhibit.

In 2002, the NC Aquarium Society purchased Jennette's Pier in Nags Head, the oldest pier along the Outer Banks, with plans to refurbish it as an outreach site. Those plans were put on hold in September 2003, when Hurricane Isabel destroyed the structure. Plans were made to completely rebuild Jennette's as a concrete structure with a 1,000-foot (300 m) pier. $25 million was set aside for construction which began in early 2009. On May 21, 2011, Jennette's Pier was finally reopened to the public. Year-round education programs and week-long summer camps focused on ethical practices in recreational fishing, marine science, and resource conservation are conducted at the pier. Jennette's Pier is self-supporting and receives no state appropriations to operate. The pier is also utilized as a platform for ocean-related scientific research projects.

All content from Kiddle encyclopedia articles (including the article images and facts) can be freely used under Attribution-ShareAlike license, unless stated otherwise. Cite this article:
North Carolina Aquariums Facts for Kids. Kiddle Encyclopedia.