The Gullah (also called Geechee) are the descendants of African slaves who lived in the Lowcountry regions of Georgia and South Carolina. They lived on the mainland and on the Sea Islands.

The Gullah were able to keep parts of their African culture, but were also influenced by North American culture. The Gullah people speak a creole language that is based on English, but has many African loanwords.

The Gullah region once extended from SE North Carolina to NE Florida.

The name "Gullah" may come from Angola, where the ancestors of some Gullah people likely came from. They created a new culture from the numerous African peoples brought into Charleston and South Carolina. Other scholars think that it came from the name of other ethnic groups in Africa. 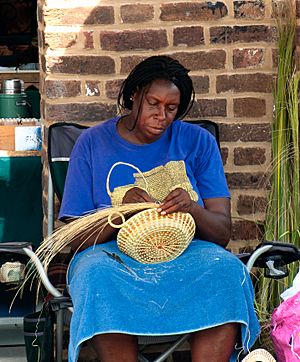 Along the western coast of Africa, the people had cultivated African rice for 3,000 years. When British colonial planters discovered that rice would grow in the American South, they wanted enslaved Africans from this region. Africans were taken as slaves from the Western region of Africa (in what is today Sierra Leone), transported to the Americas, and were traded in Charlestowne, South Carolina. These African farmers brought their skills for farming and irrigation.

According to British historian P.E.H. Hair, Gullah culture had elements of many different African cultures. The Gullah people were able to keep much of their African culture because the climate and geography of this area were similar to Africa, and because slaves lived in large groups and had little interaction with whites.

The slaves also brought the diseases malaria and yellow fever. These diseases spread to English and European settlers because of the subtropical climate, and became endemic in the region. Africans had more immunity to these diseases. Many white planters left the area during seasons when the diseases were more common. The European or African "rice drivers", or overseers, were left in charge of the plantations.

In the U.S. Civil War, white planters on the Sea Islands were afraid of an invasion by US naval forces. They left their plantations and went to the mainland. When Union forces arrived on the Sea Islands in 1861, the Gullah people wanted freedom. Many Gullahs served in the Union Army. The Sea Islands were the first place in the South where slaves were freed. Long before the end of the War, Unitarian missionaries came to start schools for the newly freed slaves.

After the Civil War ended, the Gullah became more isolated from the outside world. This happened because the rice planters on the mainland left their farms and moved away from the area. The Gullahs continued to practice their traditional culture with little influence from the outside world until the 20th century.

In 2006, the U.S. Congress passed the "Gullah/Geechee Cultural Heritage Corridor Act". This act will provide $10 million over 10 years to preserve Gullah historic sites. The Heritage Corridor will extend from southern North Carolina to northern Florida.

The Gullah people still have their traditional culture. Their traditions have survived in the Lowcountry mainland and on the Sea Islands, and also in urban areas such as Charleston and Savannah, Georgia. Gullah people who have moved far away have also preserved their traditions. In the summer, they usually send their children back to rural communities in South Carolina and Georgia, where they live with grandparents, uncles, and aunts.

All content from Kiddle encyclopedia articles (including the article images and facts) can be freely used under Attribution-ShareAlike license, unless stated otherwise. Cite this article:
Gullah Facts for Kids. Kiddle Encyclopedia.