Leland is the most populous town in Brunswick County, North Carolina, United States. The population was 23,504 at the 2020 census, up from 13,527 in 2010. As of 2020, it is considered to be one of the fastest growing towns in North Carolina. It is part of the Myrtle Beach Metropolitan Statistical Area. and the Cape Fear Council of Governments. The town of Leland is in the northeastern part of Brunswick County, with the town of Navassa to the north, Belville to east, and Boiling Springs Lake to the south. It is part of the Town Creek township, and Cape Fear region of North Carolina, a short distance north of the South Carolina state line.

Leland was incorporated as a town in 1989.

Leland has one charter school, a public charter school; Charter Day School that serves grades kindergarten through eight. Charter Day School garnered national attention in 2016 when the school was sued in the eastern district of North Carolina southern division by the ACLU and the ACLU of North Carolina; the law firm of Ellis & Winters LLP filed the challenge on Leland students. regarding the Charter school's dress code. The Charter Day School's uniform policy required female students to wear skirts, the only exception being gym class, which Charter Day's founder stated promoted chivalry, mutual respect, and traditional values. U.S. District Judge Malcolm Howard ruled that the charter schools uniform policy engaged in unconstitutional sexual discrimination, citing the equal protection clause of the constitution, by prohibiting females from wearing pants or shorts, instead mandating skirts. A federal appeals court, on August 2, 2021 tossed out Judge Howard's decision, and ordered the lower district court to review the decision and to determine whether dress code is a violation of Title IX. 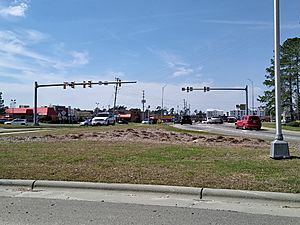 The department was established in 1959 as non-profit volunteer organization. In 2017 the Fire/Rescue Department was incorporated as a part of the township of Leland. The fire department also responds to emergency calls regarding motor vehicle accidents, and rescue calls. It has over 40 paid career staff and a roster of part-time and volunteer employees. The department has one station at 1004 Village Road, a station located at 1379 River Road.

Leland offers its residents the ability to use a voluntary service called CodeRED. CodeRED is a free high-speed emergency mass notification system provided by OnSolve, LLC. At the date of its launch the town's emergency management directory John Grimes was quoted by WECT stating: "CodeRED’s system will provide Town staff with a reliable, easy-to-use interface to quickly deliver critical information to our residents during emergencies"

Leland does not have its own municipal waste system; instead, trash service is provided by Brunswick County through GFL Environmental, Inc. The town of Leland did once offer a curbside recycling service to its citizens; the service which was done through GFL environmental Inc., expired on June 30, 2021. Prior to cancellation of service, Leland transitioned its curbside recycling program to once a month, instead of twice, on July 1, 2020. According to town officials, the deciding factor was the dramatic increase in costs associated with the recycling program. In the fiscal year 2016-17, the town spent $390,000 on the recycling program, while the town was projected to spend $723,389 in the 2021-22 fiscal year, a potential 85% increase.

All content from Kiddle encyclopedia articles (including the article images and facts) can be freely used under Attribution-ShareAlike license, unless stated otherwise. Cite this article:
Leland, North Carolina Facts for Kids. Kiddle Encyclopedia.