Hope Mills Lake, also referred to as Hope Mills Lake #1, and by long-time citizens as The Pond, was a lake in Hope Mills in Cumberland County, North Carolina. Before it was a lake, it was a mill pond which was fed by Little Rockfish Creek. The mill pond was created in 1839 near the Hope Mills Dam for the first cotton mill in the area. At the time, the area was called Little Rockfish Village. In 2003, heavy rains caused the earthen dam to fail and the lake was unintentionally drained. By 2006, the lake had not been restored so the Friends of Hope Mills Lake was incorporated as a North Carolina non-profit organization to promote and raise funds for the timely restoration and preservation of the dam. In 2008 the new dam was completed and full for the first time in 5 years. In June 2010, the Lake was intentionally drained for safety reasons, after an inspection discovered a sinkhole that was leaking water under the dam's structure. 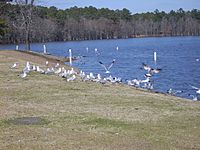 All content from Kiddle encyclopedia articles (including the article images and facts) can be freely used under Attribution-ShareAlike license, unless stated otherwise. Cite this article:
Hope Mills Lake Facts for Kids. Kiddle Encyclopedia.