Torrington is a city in, and the county seat of, Goshen County, Wyoming, United States. The population was 6,501 at the 2010 census.

It is the home of Eastern Wyoming College, and is the surrounding region's center of commercial activity. Within this primarily agricultural community, there are several fertilizer plants, a sugar beet factory, and numerous tourist facilities and retail businesses that serve the local and nearby rural populations. 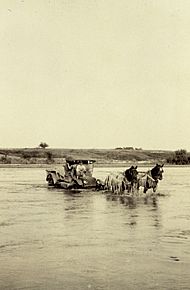 Situated on the historic Mormon Trail and near the Oregon and California trails along the banks of the North Platte River, Torrington was founded in 1900 by W.G. Curtis (1857–1913), and named by him for his home town of Torrington, Connecticut. Originally a watering and coaling station for the CB&Q Railroad, which began passenger service in 1900, the growing city soon became the main source of civilization for nearby farmers and ranchers. In 1905, the first bridge was constructed over the North Platte River, which it had previously been necessary to ford.

A post office called Torrington was established in 1889 on W. G. Curtis' farm three miles west of where the town of Torrington would be in 1900, with W. G. Curtis serving as Postmaster. By 1908 the town was incorporated as a town in Laramie County. It had a bank, three general stores, a pharmacy with a soda fountain, a land office, and two hotels (for one of which the building, although modified, still exists at 1841 Main Street.) It soon became a central place of trade for Goshen County, and for surrounding areas in eastern Wyoming and western Nebraska.

Situated on the North Platte River in eastern Wyoming near the Nebraska border, the town site survey began on April 1900, by Ashland B. Smith of the Lincoln Land Company of Nebraska. The survey and plating was completed and recorded in public records in Cheyenne on June 22, 1900, individual plots of the land were sold to residents for one dollar each by By Charles Henry Morrill, President of the Lincoln Land Company. More The Torrington Telegram (which was still published in 2015) was established in 1911. The 1900 United States Census lists only 71 inhabitants in the Torrington Precinct and does not list it as a town. All were stock growers, ranch laborers, cowboys or at school. Only one was listed as a Hardware clerk

Also in 1911, Goshen County was officially organized. The County was created from what had previously been a portion of the northern end of Laramie County. The towns of Torrington and nearby Lingle—some 10 miles away—both competed for designation as the county seat. Torrington ultimately prevailed, and was selected, after Torrington residents were able to raise sufficient funds for a construction of a courthouse. The cornerstone for the courthouse was set in 1913, during a ceremony where a band played, conducted by Hi Yoder—from whose family the nearby town of Yoder, Wyoming, takes its name.

Also by that time, early motor cars started showing up in town, the Goshen County Fair Association had been established, and in 1915 Torrington had a population of 443. In 1919, the Trail Hotel building, which still exists at 2001 Main Street, was constructed. In 1925, the Union Pacific Railroad based in Omaha constructed a spur line from Cheyenne to South Torrington, to serve the proposed Holly Sugar Corporation plant which began operations in 1926. 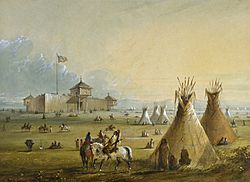 Fort Laramie as it looked prior to 1840. Painting by Alfred Jacob Miller

The large, 24-hour Holly Sugar factory was still operating in 2015 as a major employer for the Torrington area, and the preserved historic Union Pacific Depot building now houses the Goshen County Homesteaders Museum.

Today, when traveling between Torrington and Guernsey, Wyoming, motorists will be following the path of the historic Oregon and Mormon Trail as they make their way along the banks of the North Platte River past the site of the 1854 Grattan Massacre near Lingle, and past the historic western 19th-Century U.S. Army Cavalry outpost, Fort Laramie National Historic Site. 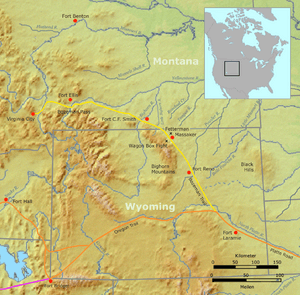 The historic California, Mormon, Oregon & Bozeman Trails headed to Fort Laramie and further on into the American West, all passed through Torrington along the banks of the North Platte River 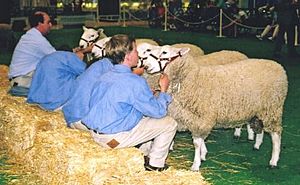 Prize sheep lined up for judging at a County Fair

Other towns and communities included in the consolidated Goshen County School District include Lingle, LaGrange, Huntley, and Yoder, among others.

Torrington has a public library, the Goshen County Library.

All content from Kiddle encyclopedia articles (including the article images and facts) can be freely used under Attribution-ShareAlike license, unless stated otherwise. Cite this article:
Torrington, Wyoming Facts for Kids. Kiddle Encyclopedia.