Goshen County is a county in the U.S. state of Wyoming. As of the 2020 United States Census, the population was 12,498. Its county seat is Torrington. The eastern boundary of the County borders the Nebraska state line.

Goshen County was created on February 21, 1911 with land given up by Laramie County. It was organized in 1913. Long before it was settled, or became Goshen County, the area had been part of territories, at one time or another, claimed by: Spain, France, Great Britain, Mexico, and the Republic of Texas. The Louisiana Purchase in 1803 permanently established the claim of the United States to the area.

By the 1820s, a route along the North Platte River had become a route for fur traders and trappers bound for the Rocky Mountains. And, in the 1840s and 1850s, the same route functioned as part of the route for early pioneers following the historic Oregon Trail or Mormon Trail westward to Oregon, California or Utah. By the late 1850s, it was the route for regularly scheduled east-west stagecoaches carrying passengers and the U.S. mail, and for the short-lived Pony Express carrying mail from Missouri to California from April 1860 to November 1861. By October 1861, transcontinental telegraph lines had been completed along the route. From September 1876 to February 1887, a north-south, Cheyenne-Deadwood stage coach line ran through the County from Cheyenne to the gold fields of the Dakota Territory.

The county was apparently named for Goshen Hole, a valley in the southwest part of the county. John C. Frémont camped in that area on July 14, 1843, and recorded that name in his journal, during his exploring expedition on the Oregon Trail. At least four conflicting stories are available for the origin of the name "Goshen Hole". The Land of Goshen in Egypt, mentioned in the 45th chapter of the Genesis in the Bible, has been suggested as the most likely. And, John Hunton, who was ranching in the area by the 1870s, was told by Seth Ward, the post sutler at Fort Laramie, that the area was named for the Biblical land. The name of Goshen Hole first appeared on a map years later, in 1888. 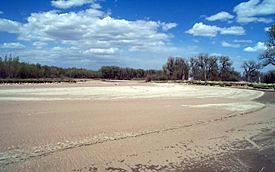 Dry stream channel on the North Platte River in Goshen County during May 2002 drought conditions.

In the late spring of 2009, a weather research team known as VORTEX2 observed the full life cycle of a tornado near the border with Nebraska in eastern Goshen County.

All content from Kiddle encyclopedia articles (including the article images and facts) can be freely used under Attribution-ShareAlike license, unless stated otherwise. Cite this article:
Goshen County, Wyoming Facts for Kids. Kiddle Encyclopedia.