Scotts Bluff County is a county on the western border of the U.S. state of Nebraska. As of the 2010 United States Census, the population was 36,970. Its county seat is Gering, and its largest city is Scottsbluff.

In the Nebraska license plate system, Scotts Bluff County is represented by the prefix 21, since the county had the twenty-first-largest number of registered vehicles registered when the state's license-plate system was established in 1922.

The county is named after a prominent bluff that served as a landmark for 19th-century pioneers traveling along the Oregon Trail. Scotts Bluff was named after Hiram Scott, a Rocky Mountain Fur Company trapper who died nearby around 1828. Washington Irving claimed after being injured and abandoned Scott had crawled sixty miles only to perish near the bluff that now bears his name. The bluff is now managed by the National Park Service as Scotts Bluff National Monument.

The town of Gering was founded at the base of the bluff in 1887, and the city of Scottsbluff was founded across the North Platte River in 1900. Joined by the river, the former transportation highway, the two cities now form Nebraska's 7th-largest urban area. 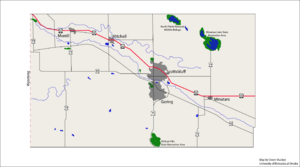 The economy of Scotts Bluff County is based on agriculture, with the primary crops being sugar beets, corn, and beans.

All content from Kiddle encyclopedia articles (including the article images and facts) can be freely used under Attribution-ShareAlike license, unless stated otherwise. Cite this article:
Scotts Bluff County, Nebraska Facts for Kids. Kiddle Encyclopedia.