Scottsbluff was founded in 1899 across the North Platte River from its namesake, a bluff that is now a U.S. National Park called Scotts Bluff National Monument. The monument was named after Hiram Scott (1805–1828), a fur trader with the Rocky Mountain Fur Company who was found dead in the vicinity on the return trip from a fur expedition. The smaller town of Gering had been founded south of the river in 1887. The two cities have since grown together to form the 7th largest urban area (the Scottsbluff Micropolitan Statistical Area) in Nebraska.

Scottsbluff was laid out in 1899 when the railroad was extended to that point. 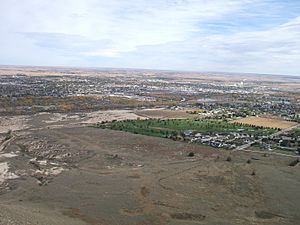 According to a 2008 article in Quality Health entitled 10 Fattest Cities in America, 31% of Scottsbluff's population is obese, making it the 7th fattest city in America. 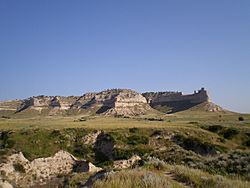 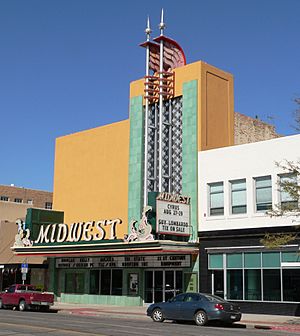 The Midwest Theater in downtown Scottsbluff is listed in the National Register of Historic Places.

The Scottsbluff area is served by Western Nebraska Regional Airport.

The now-defunct Hiram Scott College was located a few miles north of the city.

All content from Kiddle encyclopedia articles (including the article images and facts) can be freely used under Attribution-ShareAlike license, unless stated otherwise. Cite this article:
Scottsbluff, Nebraska Facts for Kids. Kiddle Encyclopedia.