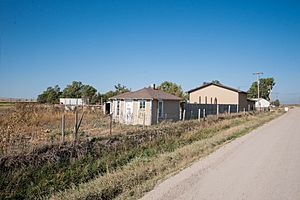 Haig (also historically called Haigville) had its start when the Union Pacific Railroad was extended to that point. It was named for Harry Haig, described in one source as a local "cowboy".

A post office was established in Haig (Haigville) in 1914, and remained in operation until it was discontinued in 1963.

All content from Kiddle encyclopedia articles (including the article images and facts) can be freely used under Attribution-ShareAlike license, unless stated otherwise. Cite this article:
Haig, Nebraska Facts for Kids. Kiddle Encyclopedia.