Banner County is a county in the western part of the state of Nebraska in the Great Plains region of the United States. As of the 2010 census, its population was 690. Its county seat is Harrisburg; there are no incorporated municipalities within the county.

When Nebraska became a state in 1867, a single county encompassed the entire Panhandle. In 1870, the Panhandle's southern half was organized as Cheyenne County. The arrival of increasing numbers of settlers led to the partitioning of the county in 1888: the eastern third became Deuel County; the middle third became present-day Cheyenne County; and the western third became Kimball, Scotts Bluff, and Banner Counties. The last of these was named by citizens who declared it would become the state's "banner county", and "the brightest star in the constellation of Nebraska counties".

The initial settlement of the area was by cattle ranchers, drawn by good pastures in the Pumpkin Creek valley. In the late 1880s, these open-range ranchers were displaced by an influx of settlers; by 1890, almost every quarter-section (160 acres, or 65 ha) was claimed by homesteaders. However, the good moisture years that had attracted these settlers were followed by a severe drought in 1893 and 1894, which drove many of the new settlers away again; the number of farms in the county declined by more than half, from 565 in 1890 to 226 in 1900. The land thus vacated was again used by ranchers, who raised both crops and cattle. The 1904 passage of the Kinkaid Act, which allowed homesteaders to claim 640 acres (260 ha) brought a new wave of settlers; however, even these larger tracts were often insufficient to support a family, and many of the Kinkaid claims were eventually sold to established cattle ranchers.

The county's growth was hindered by the absence of railroads: the nearest lines ran through Kimball, 11 miles (18 km) to the south, and Gering, 8 miles (13 km) to the north. Roads were also slow to develop in the county: in 1921, only dirt roads existed. The difficulty of reaching markets tended to discourage commercial crop farming in the county. 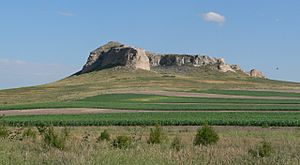 Corn growing near the base of Gabe Rock, west of Harrisburg

Rainfall in Banner County is light and variable; the average yearly precipitation at the Harrisburg weather station is 14.3 inches (360 mm). Farmers responded by resorting to irrigation. The first irrigation well was drilled by the late 1920s, and others quickly followed. By the late 20th century, center-pivot irrigation systems were in use through much of the county. By 2000, the Pumpkin Creek basin had approximately 500 registered irrigation wells. Groundwater pumping combined with drought conditions ended surface flow in Pumpkin Creek by 1993, and significantly reduced the valley's groundwater levels. In 2001, the North Platte Natural Resources District, which regulates water use in the watershed, declared a moratorium on the drilling of new wells, and limited existing operations to 14 inches (360 mm) of irrigation water per year. Complicating matters, lawsuits were filed contending water use in the Pumpkin Creek valley depleted flows into Lake McConaughy and interfered with the prior water rights of downstream irrigators.

Beginning in the early 1960s, intercontinental ballistic missiles (ICBMs), based at Warren Air Force Base near Cheyenne, Wyoming, were installed in a region of western Nebraska, Wyoming, and Colorado. From 1960 to 1963, 90 Atlas sites were constructed in Nebraska. Construction of the launch sites, and upgrading of the roads leading to them, led to an economic boom in western Nebraska. Beginning in 1963, the Atlas series was replaced by Minuteman missiles, which used solid instead of liquid fuel, and which were launched from underground silos. In the 1970s, there were 82 Minuteman III sites in the Panhandle, of which 20 were located in Banner County. 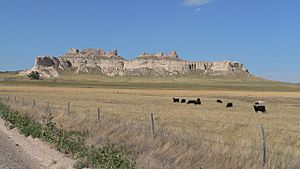 Cattle grazing near buttes on north side of Pumpkin Creek valley

Banner County lies on what was once a tableland sloping away from the Rocky Mountains. Over geologic history, it was eroded by Pumpkin Creek and other watercourses, and much of the county now lies below the original High Plains level. The county can be divided into four major geographic divisions: the low-lying and relatively flat valley of Pumpkin Creek, which occupies about 40% of the county's area; a tableland, in places smooth and in others deeply dissected, occupying the southern one-third of the county; the Wildcat Hills, a highly dissected escarpment that crosses the county's northwestern portion; and a small portion of the North Platte River valley in the county's northeastern corner.

Banner County's population peaked at 2,435 in 1890 and has steadily declined. It is one of the least populated counties of Nebraska

In the Nebraska license plate system, Banner County is represented by the prefix 85: when the state began using county numbers on its license plates in 1922, it had the 85th-largest number of registered vehicles.

All content from Kiddle encyclopedia articles (including the article images and facts) can be freely used under Attribution-ShareAlike license, unless stated otherwise. Cite this article:
Banner County, Nebraska Facts for Kids. Kiddle Encyclopedia.