Mitchell is a city in Scotts Bluff County, Nebraska, United States. It is part of the Scottsbluff, Nebraska Micropolitan Statistical Area. The population was 1,702 at the 2010 census.

Mitchell was established in 1900, when the Chicago, Burlington and Quincy Railroad was extended westward to that point. It was named after the historic Fort Mitchell nearby, which had been named after General Robert B. Mitchell, a brigadier general in the Union Army during the American Civil War. Mitchell was incorporated as a city in 1902.

According to the United States Census Bureau, the city has a total area of 0.67 square miles (1.74 km2), all of it land. Mitchell is northwest of Scottsbluff. 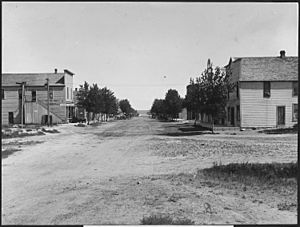 There were 696 households, of which 32.3% had children under the age of 18 living with them, 45.3% were married couples living together, 13.2% had a female householder with no husband present, 4.9% had a male householder with no wife present, and 36.6% were non-families. 32.6% of all households were made up of individuals, and 15.3% had someone living alone who was 65 years of age or older. The average household size was 2.38 and the average family size was 2.99.

The Scotts Bluff County Fair, first organized in 1887, is held in Mitchell each year. The fair includes a pageant, musical entertainment, livestock show and circus.

All content from Kiddle encyclopedia articles (including the article images and facts) can be freely used under Attribution-ShareAlike license, unless stated otherwise. Cite this article:
Mitchell, Nebraska Facts for Kids. Kiddle Encyclopedia.