Jay Em is an unincorporated community in northern Goshen County, Wyoming, United States, just below the headwaters of the Rawhide Creek, on the old Texas Trail. It lies along U.S. Route 85, 35 miles north of the city of Torrington, the county seat of Goshen County. Its elevation is 4,590 feet (1,399 m). Although unincorporated, Jay Em has a post office, with ZIP code 82219. 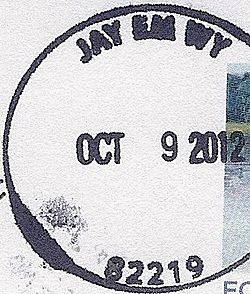 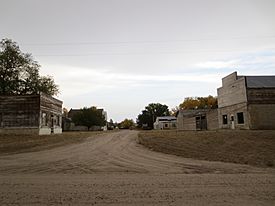 The site of the town was a watering hole on old Texas Trail. The land around the watering hole was claimed by Jim Moore (d.1875) in the 1860s. By 1869, Moore had the second largest cattle ranch in the Wyoming Territory, under the brand "J Rolling M", from which the community and "Jay Em Creek" would take later their names.

The town was established to support ranchers in the surrounding area by Lake Harris between 1912 and 1915, and by 1915 a post office was established. A newspaper, the weekly Jay Em Sentinel and Fort Laramie News (circulation 300) ran from 1917 to 1921. The town thrived with a number of businesses growing up, including a lumber yard and general store, and the Jay Em Stone Company, which made gravestones and building products from stone quarried in the Rawhide Buttes area. By the 1930s and the advent of the automobile, the town began declining somewhat, and beginning in the 1980s, most of the few remaining residents gradually moved to more modern accommodations scattered around the edges of town, eventually leaving the old, historic center of town for the most part abandoned.

The center of the original community is included in the Jay Em Historic District, and listed on the National Register of Historic Places.

All content from Kiddle encyclopedia articles (including the article images and facts) can be freely used under Attribution-ShareAlike license, unless stated otherwise. Cite this article:
Jay Em, Wyoming Facts for Kids. Kiddle Encyclopedia.