Cornwall is a town in Litchfield County, Connecticut, United States. The population was 1,567 at the 2020 census.

Cornwall was incorporated in May 1740, and was named after Cornwall, England. 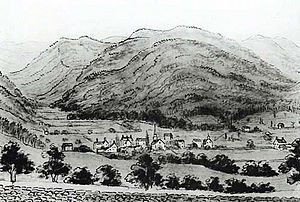 A sketch of the village by John Warner Barber (1835) shows the buildings used by the Foreign Mission School, to the right of the church at center.

There were 615 households, out of which 29.4% had children under the age of 18 living with them, 52.5% were married couples living together, 8.5% had a female householder with no husband present, and 36.6% were non-families. 30.7% of all households were made up of individuals, and 12.0% had someone living alone who was 65 years of age or older. The average household size was 2.33 and the average family size was 2.93.

Some of the main features of Cornwall include the Cream Hill Lake, the Covered Bridge, Mohawk Ski Mountain and the town which contains a library and tennis courts.

The Cornwall Library [1], organized in 1869, constructed a new building in 2002 that houses a collection of over 28,000 items. It also sponsors a long-running art show along with many other events.

The Cornwall Chronicle [2] is a non-profit monthly newspaper that publishes news and feature stories about Cornwall, a calendar of events, and drawings by local artists. It was started in 1991 and has not missed an issue since.

The town was also home to the Foreign Mission School. 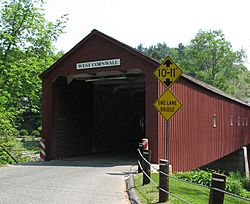 The covered bridge in West Cornwall, crossing the Housatonic River, is one of only three covered bridges in Litchfield County. It has a span of 242 feet (74 m) and has been in continuous service since 1864.

All content from Kiddle encyclopedia articles (including the article images and facts) can be freely used under Attribution-ShareAlike license, unless stated otherwise. Cite this article:
Cornwall, Connecticut Facts for Kids. Kiddle Encyclopedia.