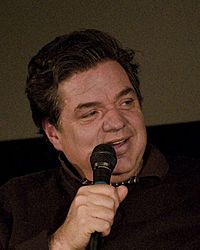 Oliver James Platt (born January 12, 1960) is a Canadian-born American actor. He was born in Windsor, Ontario. His career began in 1985. He is known for his role as Russell Tupper in Huff, which earned him an Emmy and Golden Globe Award nomination.

All content from Kiddle encyclopedia articles (including the article images and facts) can be freely used under Attribution-ShareAlike license, unless stated otherwise. Cite this article:
Oliver Platt Facts for Kids. Kiddle Encyclopedia.