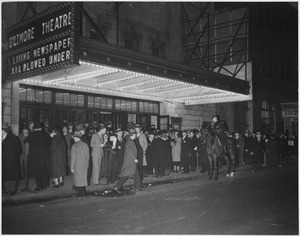 Designed by architect Herbert J. Krapp for impresario Irwin Chanin, the theatre opened on December 7, 1925, with the play Easy Come Easy Go. With a seating capacity of 903, it was one of Broadway's smaller venues.

The theatre was used by Federal Theatre's Living Newspaper project in the 1930s. CBS leased it for use as a radio and television studio from 1952 until 1961. The producer David Cogan acquired the Biltmore in 1958. In 1968, the groundbreaking rock musical Hair opened at the theatre.

In 1986, Cogan sold the Biltmore to developer Samuel Pfeiffer. In 1987, a fire struck the Biltmore. The blaze, which was later determined to be an act of arson, destroyed the interior. After the fire, the building sat vacant for 14 years, suffering more structural damage from water and vandals. Most plans proposed for its future use – such as a showcase for "Best of Broadway" revues – were rejected since its New York City landmark designation required it to operate only as a legitimate Broadway house if renovated. In 1993, the Nederlander Organization and Stewart F. Lane acquired the Biltmore; after being unable to secure a deal with theatre unions, the theatre was sold to developer Joseph Moinian.

In 2001, the theatre was assumed by the Manhattan Theatre Club as a permanent home for its productions. Polshek Partnership Architects restored surviving sections of the original theatre and EverGreene Architectural Arts restored plasterwork and reconstructed missing parts. With 622 seats, the Biltmore has about two-thirds of the capacity of the old venue, but it includes modern conveniences such as elevators and meeting rooms. The Biltmore's landmarked features, such as the proscenium arch, dome, staircases and a vaulted second-floor gallery, were restored or replicated.

The Biltmore Theatre is prominently featured in The Muppets Take Manhattan as the location of the Broadway show that the Muppets put on in the finale of the film.

All content from Kiddle encyclopedia articles (including the article images and facts) can be freely used under Attribution-ShareAlike license, unless stated otherwise. Cite this article:
Samuel J. Friedman Theatre Facts for Kids. Kiddle Encyclopedia.