Kent is a town in Litchfield County, Connecticut, alongside the border with New York. The population was 3,019 according to the 2020 census. The town is home to three boarding schools: Kent School, the Marvelwood School, and South Kent School. The Schaghticoke Indian Reservation is also located within town borders. The town is also home to former U.S. Secretary of State Henry Kissinger.

The Town of Kent was sectioned in 1737 and settled about 1739. The community was important in the growth of iron production.

Macedonia Brook State Park was first opened in 1918 with a donation of 1,552 acres (6.28 km2) from White Memorial Foundation of Litchfield. Since then, it has now grown to a size of 2,300 acres (9.3 km2) and is used for outdoor recreation throughout the year.

Besides the pure beauty of Appalachia, the park also boasts extensive trails, campgrounds, a venue for large group picnics, a small hilltop lake and of course, Macedonia Brook. Visitors can also take advantage of the numerous grills set up around the park. From peaks on the Blue Trail, hikers can take in fantastic views of the Catskill Mountains and the Taconic Mountains. 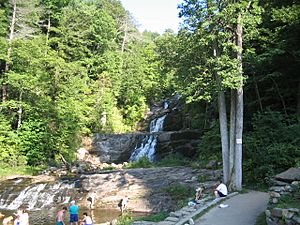 Kent Falls State Park is often called “The Jewel of the Inland Parks” with its scenic view of 17 different waterfalls. The falls are fed by wetlands which are located in Warren, and empties directly into the Housatonic River, which is across the street from the park.

A trail winds a quarter of a mile up along the falls and although it is not difficult to walk it is steep, rising 250 feet (76 m) in just a quarter mile. In 2006 a 1.1 million dollar trail renovation was finished which provided new viewing platforms and a redesigned trail. Swimming was at one time allowed along the entire length of the falls but due to a number of serious accidents, and large scale damage to the natural environment which thrives in the park all of the area along the water above the bottom level is now closed by state law.

The park is designated as a Trout Park and is stocked with trout from the state's hatcheries. Due to the Trout Park designation the daily creel limit in the park is two fish. 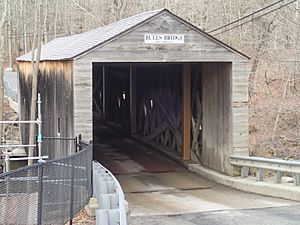 Bull's Bridge is one of three remaining covered bridges in Connecticut dating from the 19th century. George Washington crossed the Housatonic River near the site of the present bridge in 1781.

A museum featuring the studio and antique collections of Eric Sloane.

A museum dedicated to antique machinery, as the name implies. One notable exhibit is its 3 ft (914 mm) narrow gauge railroad, which features an operating steam locomotive.

U.S. Route 7 is the main north–south highway in the town, while Connecticut Route 341 is the main east–west highway. Route 7 leads north 25 miles (40 km) to North Canaan and south 28 miles (45 km) to Danbury, while Route 341 leads east 8 miles (13 km) to Warren and west to the New York border and the town of Amenia.

All content from Kiddle encyclopedia articles (including the article images and facts) can be freely used under Attribution-ShareAlike license, unless stated otherwise. Cite this article:
Kent, Connecticut Facts for Kids. Kiddle Encyclopedia.