Amenia is a town in Dutchess County, New York, United States. The population was 4,436 at the 2010 census. The town is on the east border of the county.

Amenia is one of the original towns formed by act of March 7, 1788. It comprises the width of the Oblong Tract, and the east tier of lots in the Great Nine Partners Patent.

The first known inhabitants of the area were members of the Pequot people, who had a village in the northeast part of the town on the west side of Indian Pond called Wechquadnach. The Scatacooks from Connecticut were accustomed to hold pow wows in South Amenia.

In 1703 Richard Sackett was granted a patent for land along Wassaic Creek. As this land was already included in the previous Great Nine Partners Patent, Sackett's title was invalid. Sackett was also one of the partners in the Little Nine Partners Patent. He settled about one mile south of Wassaic at a site called the "Steel Works", as furnace and foundry were established there during the Revolution to manufacture steel for the use of the army. There was a forge at that location as early as 1770.

In 1724 Captain Garret Winegar (Winnegar) came to Amenia Union from East Camp in Columbia County, New York. The Winegars were among the Palatine families from the Middle Rhine that had settled in the Province of New York in 1710 under the sponsorship of Queen Anne. A second Palatine family, that of Johannes Rouh (Rowe), came to Hitchcock's Corner (Amenia Union) sometime prior to 1731. Samuel Hitchcock, for whom the hamlet was named, arrived in about 1757. Dr. Thomas Young lived at the "Corner" for several years and married a daughter of Captain Winegar. The town was named by Young, derived from Latin and meaning "pleasant to the eye".

The house of worship known as the "Red Meeting House" was built in 1758, and stood about a mile northeast of the village of Amenia. George Whitefield preached there in the summer of 1770. The Precinct of Amenia was established by act of the colonial legislature in 1762.

In the summer of 1778, a large number of prisoners - mostly Hessians, taken at the battle of Saratoga the year before - were marched through the town on their way to Fishkill Landing, where they crossed the Hudson. It is said that some of the Hessian soldiers solicited the people to aid them in escaping; a few succeeded, and remained in this country. Jacob Bockee, a captain in the company in Col. Willet's Regiment, was a member of the Assembly in 1795 and 1797, where he introduced a bill for the abolition of slavery in the state. Most of the slaves in the town were manumitted in the manner and under the conditions prescribed by law. Owners were not permitted to make free and cast off any slave who was not capable of providing for himself. In 1824, three years before the completed abolition of slavery in the state, there were 32 slaves in Amenia.

About the year 1812 a company was organized in this town for the manufacture of woolen goods, styled the "Amenia Manufacturing Company". The factory was located on the banks of Webatuck Creek at Leedsville.

The Town of Amenia was officially formed in 1788.

The east town line is the border of Connecticut. U.S. Route 44 crosses the north part of the town. 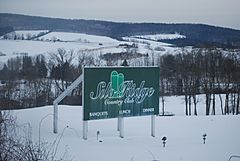 There were 1,625 households out of which 29.4% had children under the age of 18 living with them, 51.4% were married couples living together, 9.8% had a female householder with no husband present, and 33.9% were non-families. 27.9% of all households were made up of individuals and 13.0% had someone living alone who was 65 years of age or older. The average household size was 2.46 and the average family size was 2.97.

Communities and locations in Amenia

Buildings in Amenia listed on the National Register of Historic Places

Buildings in Amenia listed on the National Register of Historic Places include:

All content from Kiddle encyclopedia articles (including the article images and facts) can be freely used under Attribution-ShareAlike license, unless stated otherwise. Cite this article:
Amenia (town), New York Facts for Kids. Kiddle Encyclopedia.