Norfolk is perhaps best known as the site of the Yale Summer School of Music – Norfolk Chamber Music Festival, which hosts an annual chamber music concert series in "the Music Shed", a performance hall located on the Ellen Battell Stoeckel estate to the west of the village green. Norfolk has important examples of regional architecture, notably the Village Hall (now Infinity Hall, a shingled 1880s Arts-and-Crafts confection, with an opera house upstairs and storefronts at street level); the Norfolk Library (a shingle-style structure, designed by George Keller, ca 1888/1889); and over thirty buildings, in a wide variety of styles, designed by Alfredo S. G. Taylor (of the New York firm Taylor & Levi) in the four decades before the Second World War.

Norfolk was first settled in 1744 and incorporated in 1758, later than most surrounding towns because of the dense woods, rocky soil and high elevation. Originally a farming community, nineteenth-century Norfolk saw the rise of numerous small factories, many of which fabricated tools and farming implements from local iron ore, and mills, which took advantage of fast-flowing mountain streams.

By the late 19th century, however, rail connections to New York, Hartford, Pittsburgh and Boston gave visitors ready access to Norfolk's cool summers and clean air, and Norfolk soon evolved into a fashionable resort as its small industry declined. The town has ever since had a bustling "summer colony." Like several other towns in the Litchfield Hills, Norfolk has, in more recent years, developed a sizable population of "weekenders" from New York City and environs.

The town of Norfolk celebrated its semiquincentennial (250th anniversary) on August 1–2, 2008. 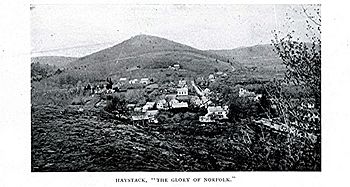 According to the United States Census Bureau, the town has a total area of 46.4 square miles (120 km2), of which, 45.3 square miles (117 km2) of it is land and 1.1 square miles (2.8 km2) of it (2.37%) is water. The town is located in the Litchfield Hills portion of the Appalachian mountain range. Norfolk's elevation is 1,230 feet above sea level, and the town is sometimes called "the Icebox of Connecticut" for its severe winters and particularly cool summers.

There were 676 households, out of which 28.0% had children under the age of 18 living with them, 58.3% were married couples living together, 6.5% had a female householder with no husband present, and 31.7% were non-families. 24.6% of all households were made up of individuals, and 10.4% had someone living alone who was 65 years of age or older. The average household size was 2.44 and the average family size was 2.92.

The main thoroughfares of the town are Route 44 (going east-west, and also known as Greenwoods Road) and Route 272 (going north-south, with 272N also known as North Street and 272S also known as Litchfield Road).

This climatic region is typified by large seasonal temperature differences, with warm to hot (and often humid) summers and cold (sometimes severely cold) winters. According to the Köppen Climate Classification system, Norfolk has a humid continental climate, abbreviated "Dfb" on climate maps.

All content from Kiddle encyclopedia articles (including the article images and facts) can be freely used under Attribution-ShareAlike license, unless stated otherwise. Cite this article:
Norfolk, Connecticut Facts for Kids. Kiddle Encyclopedia.