Bridgewater is a town in Litchfield County, Connecticut, United States. The population was 1,727 at the 2010 census.

Bridgewater was the only remaining dry town in Connecticut until voters approved the sale of alcohol in a 2014 referendum, by a 660-246 vote.

There were 703 households out of which 29.4% had children under the age of 18 living with them, 67.4% were married couples living together, 5.5% had a female householder with no husband present, and 25.2% were non-families. 21.1% of all households were made up of individuals and 8.1% had someone living alone who was 65 years of age or older. The average household size was 2.55 and the average family size was 2.96.

Bridgwater is served by two state highways: Route 67 running east-west in the northern part of town, and Route 133 running north-south. 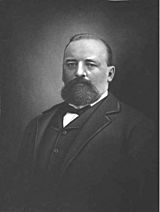 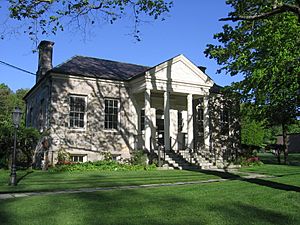 In 1904, the Bridgewater Library Association was established, succeeding previous lending libraries operated by individuals in town. In 1909 room for library purposes was set aside in recently built town hall. A bequest from William Dixon Burnham, a native who made his fortune in shipping, allowed a Greek Revival style building to be erected from 1925 to 1926, using Mine Hill granite from nearby Roxbury. The dedication took place on August 26, 1926.

By the early 1960s, the library's two floors were finally becoming cramped. With the death of town resident Van Wyck Brooks, a biographer and critic, a "Van Wyck Brooks Memorial Fund was set up to raise money for a library wing in his name. The effort, however, flopped, despite support from such celebrities as Pearl Buck and Archibald MacLeish. Just enough money was raised for a bust of the author and a display of some of his memorabilia. His desk, books, and other items can be found on display in the library's biography section. The fund-raising committee disbanded in 1972, but a year later, a surprising source of funding became known.

Charles E. Piggott, a hermit, misanthrope, and miser living in a Los Angeles slum, died in 1973. As a bulldozer operator razed the shack that had been Piggott's home, the operator happened to notice something shiny. It was a bottle with Piggott's holographic will inside.

Despite having no connection whatsoever with Bridgewater, Piggott left the Fund $300,000 – money from careful investments over the years. The state of California contested the will and the library hired a lawyer, at considerable cost, to defend the bequest. Eventually, the lawyer won the case and the library got $210,000.

By 1980, the Van Wyck Brooks Memorial Wing was dedicated, doubling the size of the library.

Burton Bernstein, a longtime town resident, looked into why Piggott would leave money to the library, then wrote an article on the bequest, which appeared in the December 18, 1978, issue of The New Yorker. Piggott, as it turned out, had been a voracious reader on any number of subjects and loved public libraries (which are, after all, free). Bernstein believes that Piggott came across Van Wyck Brooks’ The Flowering of New England, which describes the hermit, Henry David Thoreau. Piggott may have compared himself to Thoreau, or saw wisdom in some of Thoreau's ideas as presented by Brooks. Perhaps this quote stuck in his mind: "The mass of men led lives of quiet desperation… Did they not know that the wisest had always lived, with respect to comforts and luxuries, a life more simple and meager than the poor?… Poverty had given him all this wealth."

All content from Kiddle encyclopedia articles (including the article images and facts) can be freely used under Attribution-ShareAlike license, unless stated otherwise. Cite this article:
Bridgewater, Connecticut Facts for Kids. Kiddle Encyclopedia.