New Preston is a rural village in the northwestern corner of the town of Washington in Litchfield County, Connecticut, United States. The village is also at the center of New Preston CDP, a census-designated place (CDP), whose population was 1,110 at the 2000 census. 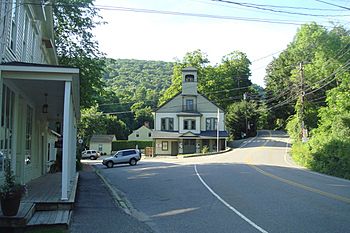 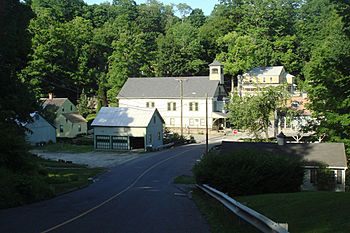 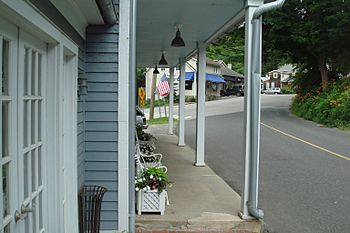 According to the United States Census Bureau, the CDP, which includes the entire northwestern quadrant of the town of Washington including the village of Marbledale, Mount Bushnell and Meeker Swamp, has a total area of 7.8 square miles (20 km2), of which, 7.4 square miles (19 km2) of it is land and 0.5 square miles (1.3 km2) of it (5.86%) is water. The dominant geographic feature of New Preston is Lake Waramaug, which is situated just north of the New Preston village center and is the headwaters of the East Aspetuck River, which runs through the village center and over New Preston Falls. The terrain is characterized by steep hills and narrow valleys, with a preponderance of talus slopes and ledge rock.

There were 439 households out of which 30.3% had children under the age of 18 living with them, 60.6% were married couples living together, 5.9% had a female householder with no husband present, and 30.8% were non-families. 26.2% of all households were made up of individuals and 11.6% had someone living alone who was 65 years of age or older. The average household size was 2.49 and the average family size was 3.00.

Many of New Preston's inhabitants are part-time residents who principally reside in New York City, so census data may not accurately reflect the population's actual demography.

The two main roads in New Preston are U.S. Route 202 and Connecticut Route 45. There is no public transportation. 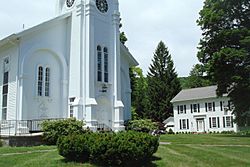 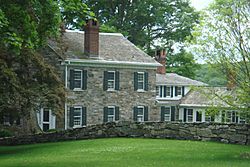 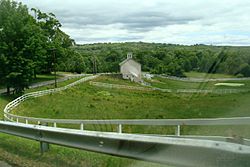 A Barn on New Preston Hill

Archeological evidences suggests that Native Americans first settled in the area around 10,000 years ago, following the retreat of the glaciers at the conclusion of the last ice age. What is now known as New Preston came to be inhabited by the Wyantenock tribe of Native Americans, who spent summers at Lake Waramaug, establishing a pattern of seasonal residence that is widely repeated by New Preston's present-day occupants.

The signature of Chief Waramaug, who led the Wyantenock tribe in the early 18th century, appears on several local Colonial-era property records, including "The New Milford North Purchase," which encompassed a substantial swath of southern Litchfield County, including contemporary New Preston. Colonists settled New Preston in 1741, and the General Assembly of the Connecticut Colony granted a petition for the establishment of the New Preston Ecclesiastical Society in 1753. In April 1778 the 270 families living in the area petitioned the General Assembly to be incorporated as a town. The petition was granted in January of the following year, incorporating the Town of Washington from the parishes of Judea and New Preston and taking from the towns of Woodbury, Litchfield, Kent and New Milford. The action marked the first establishment of a municipality in Connecticut after the Declaration of Independence was signed. The town was named after George Washington, who, in his capacity as Commander of the Continental Army during the American Revolution, passed through the area several times. In May 1781, George Washington slept in New Preston at the Cogswell Tavern, which still stands on present-day Christian Street and is used as a private residence.

In the early decades of the 19th century (the era of the Industrial Revolution), numerous mills and modestly scaled factories were constructed along the East Aspetuck River, which drops precipitously between its source at Lake Waramaug and the New Preston village center, providing a robust source of water power. New Preston housed an iron works, as well as manufacturers of twine, hats, cheese boxes, ax handles, shoes, and harnesses. However, with the advent of electricity, expansion of national rail networks, and the rise of larger, more accessible manufacturing centers during the latter part of the 19th century, industrial activity in New Preston decreased, eventually disappearing altogether.

In the latter decades of the 19th century, New Preston began its transformation to a summer colony. With the arrival of the Shepaug Railroad in 1872, passenger service was introduced between New Preston Station and New York City, which gave rise to the construction of summer homes and inns around the perimeter of Lake Waramaug.

The railroad ceased operation in 1948, and many of the large inns on the lake closed, giving way to single-family residences used primarily as vacation homes.

By the 1970s, much of New Preston's diminutive village center had fallen into decline, with many shops left vacant and in various states of disrepair. Several buildings and locations in New Preston were used in the filming of the 1981 horror movie "Friday the 13th, Part 2.

In the mid-1980s, a transformation of the village center began with the opening of a store specializing in antique gardening books and horticultural prints. Antique shops and other upscale retail establishments soon followed, and many of New Preston's historic commercial structures underwent renovation. The village's only grocery store, pharmacy, and gas station closed, leaving New Preston largely devoid of essential services.

By the mid-1990s, the village center had been completely made over into a picturesque, high-end retail destination catering primarily to weekend residents and out-of-town visitors.

During the booming economy of the late 1990s and early first decade of the 21st century, the gentrification of New Preston shifted into high gear. Modest lake cottages around Lake Waramaug were torn down and replaced with larger, more luxurious homes, and other lake houses underwent substantial renovation and expansion. Two of the four remaining inns on the lake—The Inn at Lake Waramaug and The Birches Inn—were converted into lavish single-family residences.

Because New Preston's steep, rocky terrain presents significant constraints to development, most viable development sites were utilized prior to 1900, making contemporary construction of new homes and businesses rare. As a consequence, New Preston exhibits a high degree of architectural and aesthetic cohesion. When new construction does occur, it generally follows—or attempts to follow—the historic vernacular. Portions of New Preston Hill Road and Findlay Road, three quarters of a mile west of the village center, are included in the New Preston Hill Historic District, which was listed on the National Register of Historic Places in 1985. The more prominent buildings in that district include Hill Congregational Church, Rev. Samuel Whittlesey House (1808), and John Ferris House (1800).

A substantial portion of the land in and around New Preston is permanently protected open space, which consists of state parks, local land trust holdings, and privately owned parcels under conservation easement. Public open space areas include the Macricostas Preserve, Mt. Bushnell State Park, and a 31-acre (130,000 m2) parcel adjacent to the New Preston village center, which the Town of Washington purchased in 2010 with money from its open space fund.

In 1996, the Connecticut Department of Transportation designated the 6.9 miles (11.1 km) of perimeter roads around Lake Waramaug as state scenic roads [1], affording them a legal status that discourages maintenance or improvements that would detract from the roads' scenic qualities [2]. In 2010, New Preston's main commercial thoroughfare, East Shore Road (also known as Connecticut Route 45), was designated a state scenic road, together with a 2.8-mile (4.5 km) portion of Route 202 extending northeast from the junction with Route 45 to Rabbit Hill Road.

All content from Kiddle encyclopedia articles (including the article images and facts) can be freely used under Attribution-ShareAlike license, unless stated otherwise. Cite this article:
New Preston, Connecticut Facts for Kids. Kiddle Encyclopedia.