Litchfield is a borough in, and the village center of, the town of Litchfield in Litchfield County, Connecticut, United States. The population was 1,258 at the 2010 census. The entire borough was designated a Connecticut historic district in 1959 by special act of the state General Assembly and is listed on the National Register of Historic Places. Part of the borough is also a National Historic Landmark, the Litchfield Historic District. 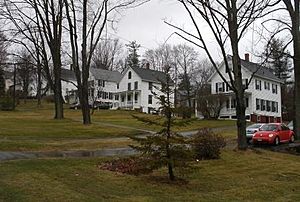 The borough of Litchfield was incorporated as a village in 1818, one of only two villages ever established in the state. In 1879 it was rechartered as a borough.

In 1959, the entire borough was designated an historic district by a special act of the Connecticut General Assembly, with name "Old and Historic Litchfield Historic District". It was the first such district in Connecticut. Subsequently, on November 24, 1968, a central portion of the borough was given National Historic Landmark status as "Litchfield Historic District", and on November 29, 1978, the entire borough was listed on the National Register of Historic Places (NRHP) as an historic district.

As a result of the state historic district designation, exterior changes to structures in the district that are visible from a public way must be reviewed and approved by the Litchfield Historic District Commission. The review process is intended to prevent changes that would be "incongruous with the District's historic and architectural character."

There were 573 households, out of which 28.3% had children under the age of 18 living with them, 50.8% were married couples living together, 7.3% had a female householder with no husband present, and 38.9% were non-families. 35.4% of all households were made up of individuals, and 18.3% had someone living alone who was 65 years of age or older. The average household size was 2.24 and the average family size was 2.94.

All content from Kiddle encyclopedia articles (including the article images and facts) can be freely used under Attribution-ShareAlike license, unless stated otherwise. Cite this article:
Litchfield (borough), Connecticut Facts for Kids. Kiddle Encyclopedia.