Christine Jane Baranski (b. 2 May 1952) is an American stage, movie and television actress. On stage, she played Mrs. Lovett in Sweeney Todd and the title character in Mame. She has also acted in multiple movies. Baranski was born in Buffalo, New York.

Baranski was born in Cheektowaga, Buffalo, New York, the daughter of Virginia (née Mazurowski) and Lucien Baranski, who edited a Polish-language newspaper. She is of Polish descent, and her grandparents were actors in the Polish theater. Baranski attended high school at the Villa Maria Academy in Cheektowaga. She then studied at New York City's Juilliard School (Drama Division Group 3: 1970–1974) where she graduated with a Bachelor of Arts degree in 1974. 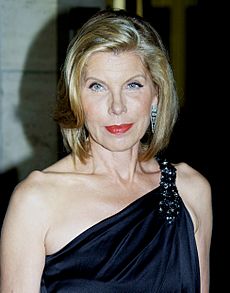 Baranski at the Metropolitan Opera 2010 opening night of Das Rheingold

Baranski made her Off-Broadway debut in Coming Attractions at Playwrights Horizons in 1980, and has appeared in several Off Broadway productions at the Manhattan Theatre Club, starting with Sally and Marsha in 1982.

Baranski has also starred in various roles in films and television. 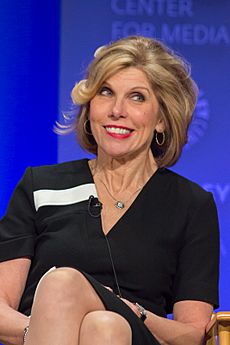 Baranski at the 2015 PaleyFest presentation for The Good Wife

Baranski says "the first real TV show" that she worked on was Cybill. Earlier, she had appeared in short-term roles on various daytime soap operas, including All My Children and Another World.

Baranski was married to actor Matthew Cowles from October 1983 until his death on May 22, 2014. They have two daughters, Isabel (born 1984) and Lily (born 1987). One of her daughters attended law school, passed the New York bar exam, and worked in the Brooklyn district attorney's office during the run of The Good Wife.

All content from Kiddle encyclopedia articles (including the article images and facts) can be freely used under Attribution-ShareAlike license, unless stated otherwise. Cite this article:
Christine Baranski Facts for Kids. Kiddle Encyclopedia.