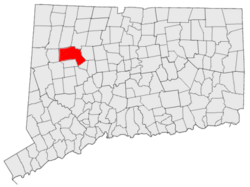 Northfield is an unincorporated village in the town of Litchfield, Litchfield County, Connecticut.

It is the home of the former Northfield Knife Company, which was founded in 1858 and ceased operations in 1926. The factory resided directly across the street from what is known as Knife Shop Dam. The foundations of the original knife factory still remain. Northfield Pond and Knife Shop Dam are part of Humaston Brook State Park. This undeveloped 141 acre state park provides visitors with both hiking and fishing opportunities.

The village of Northfield has its own Postal Zip Code, 06778, but has no operating Post Office. The Gilbert Library is located at 38 Main Street. The library was founded by the estate of William L. Gilbert, one of the foremost clockmakers of 19th-century Connecticut and a Northfield native.

The Litchfield Montessori School is located on Knife Shop Road, in the building that once housed the Northfield Elementary School. The Litchfield Montessori School was founded in 1972, and moved to its current location in 1979. This school serves children between the ages of 1½ and 12 years of age. There is a public basketball court that borders the school which is very popular with local residents.

All content from Kiddle encyclopedia articles (including the article images and facts) can be freely used under Attribution-ShareAlike license, unless stated otherwise. Cite this article:
Northfield, Connecticut Facts for Kids. Kiddle Encyclopedia.